by Andrew Burgess
published: 3 May 2010 in Album Reviews
Tweet 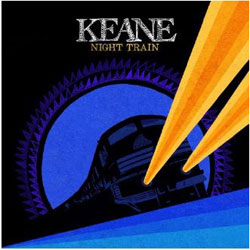 For a while there it seemed that every pop band with a stadium bent was touted by one reviewer or another as the potential new U2. There’s nothing wrong with being singled out as a worthy stand-in for a decades old rock mainstay. But Keane were called the new Coldplay in 2004, and as such, they were pigeonholed into a piano-pop rut alongside The Fray and Daniel Powter. What do you do when you’re stacked against a band that clearly doesn’t need a successor?

Keane’s post Hopes And Fears career has been a natural progression from their droopy, melancholy piano pop to something with a bit more brawn and a bit less mope. So, where 2008’s Perfect Symmetry may have seemed over the top, Night Train takes that progression and amplifies it in a natural direction, adding a bit of dance-pop and hip-hop flair to the piano-based palette.

The instrumental electro-ambient House Lights opens the EP with a red herring. This is a promising track that sets a dark and ominous tone – indeed, one can nearly see the fabled night train’s headlight bearing down as it rips along the groaning tracks. But we’re quickly catapulted into pop oblivion. Back In Time sounds like it could’ve been an early Interpol track with big distorted synths and a sludgy groove. But, at the very least, it establishes that Keane are not content to merely rest on their piano-heavy laurels.

Stop For A Minute is a clear departure into hip-hop territory; it’s an urban jam complete with built-in over-the-head full-audience slow claps. “If I stop for a minute, I think about things I really don’t want to know,” sings Tom Chaplin. Somali-Canadian rapper K’Naan takes over the outro with rhymes like, “Baby, you are just beautiful, from crown to your cuticles.”

More than two decades after Aerosmith and Run DMC, we’ve established that rock and rap go together like peas and carrots. But here, we’ve got to ask why, besides to produce a potentially chart-topping slow-jam. K’Naan also makes an appearance on Looking Back, a power anthem that samples Gonna Fly Now (the Rocky theme song) to cheesy and cringeworthy effect.

Ultimately, Night Train is most notable for its two guest appearances. The only song that really finds Keane out on a limb is Ishin Denshin (You’ve Got To Help Yourself), a sort of hipster disco roller-rink number which features� subtle vocal stylings by Japanese MC Tigarah. The album’s clear standout track, it works in the same unexpected way as Weezer‘s Love Is The Answer.

Even with a little sonic experimentation and the obvious beefiness of the production, Keane still comes off as little more than a safe choice for anyone looking to buy one pop CD this year. The music’s catchy, sure, and this time round it’s undeniably uplifting in both tone and substance, but there’s precious little about Night Train that’s surprising enough to elevate it out of the realm of song-of-the-moment radio pop.