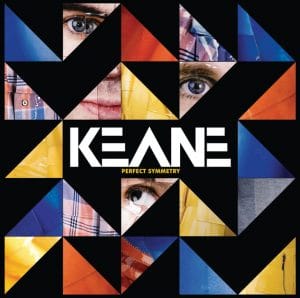 Keane are back. And let’s face it, that phrase probably didn’t fill every fibre of your very being with excitement, did it? For Keane are a much maligned bunch – to some, the epitome of bland, beige, safe middle of the road pop bought by people who shop for their music in Tescos.

Even poor old Tom Chaplin’s stint in rehab last year (about as clear a marker of rock n roll delinquency as you can get) was sneered at by peers such as Kasabian and Noel Gallagher. While the majority of those taunts were born of inverted snobbery on the most part, it’s undeniable that when you sell as many records as Keane have done over the last few years, you’d be daft to start experimenting around just for the sake of it.

Which may explain the gasps of astonishment heard a few months ago when Spiralling was released as a free download. It’s the first track on Perfect Symmetry, and is fantastic – producer Stuart Price has stamped his mark all over it, with the terrific ‘wooooh!’ in the chorus and crunchy synths almost commanding you to dance. Close your eyes and you can picture the mirrorball spinning around. Is this really Keane?

Unsurprisingly, the rest of the album rests on safer terrain (let’s face it, Keane were never going to go full on Scissor Sisters, were they?) and Perfect Symmetry soon settles down into an album of big pop anthems. It’s music made for stadiums, with an eye on the likes of Snow Patrol and U2, but it’s also an album which contains Tim Rice-Oxley’s strongest set of songs yet.

There’s definitely an ’80s influence all over the album, but not in that cloying, self-conscious way that make The Feeling such an infuriatingly cynical listen. Again And Again has another shiny synth feel to it, while Better Than This doesn’t so much pay homage to David Bowie‘s Ashes To Ashes, but wears a clown costume and screams “come on BBC – make a wittily ironic comedy-drama about this“.

Even though it’s Rice-Oxley who writes the songs, there’s thinly veiled references to Chaplin’s recent troubles all over the album. “I dreamed I was drowning in the River Thames” begins the terrific The Lovers Are Losing, Black Burning Heart has a cheery chorus of “the sky will be my shroud, a monument of cloud” and the title track sees Chaplin solemnly intoning that “life is unkind and over so soon, there is no golden gate, there’s no heaven waiting for you”. Jeez, cheers for that, Tom.

That title track is certainly impressive though, with its soaring chorus and the trademark Keane piano chords giving the song a hopeful and uplifting feel. Rice-Oxley can still be guilty of the odd lyrical clunker though – quite what “I dream in emails, worn-out phrases” actually means is anyone’s guess.

Perfect Symmetry is not without its filler tracks either – You Don’t See Me is a directionless dirge, while the second half of the album suffers badly from lack of variety. The fresh experimentation of the first few tracks is gone, and there’s only a number of mid-paced ballads about love being the only thing needed to change the world without feeling a bit wearisome.

Yet there are enough good signs here – the funky touches to the infectious Pretend That You’re Alone for example – to demonstrate that maybe Keane aren’t the bland bedwetters that your more hip music friend may have dubbed them. While this isn’t the daring brave leap forward that was whispered about when Spiralling was released, it will no doubt prove another multi-million seller for the trio from Battle.