by John Murphy
published: 7 May 2012 in Album Reviews
Tweet 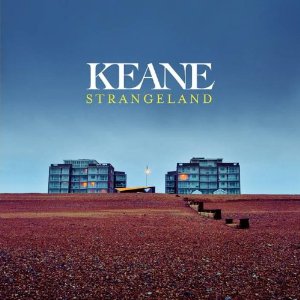 Poor old Keane. You spend years being the butt of everyone’s joke as a safe, middle-of-the-road, Coldplay-lite band. You even have to endure jokes about your lead singer’s time in rehab. And, when you try to change the template and do something different, the same catcalls greet you.

Last time we met the trio (now a quartet, following the promotion of touring bass player Jesse Quin from East Sussex, they were at something of a crossroads. Tom Chaplin had just come out of rehab for alcohol and drugs problems (or, if you believe Tom from Kasabian, an addiction to port), and the band had been working with Stuart Price to create a sound that, while not startlingly different, was far removed from their previous work. Indeed, it could be argued that Spiralling was the best thing they’ve ever done.

The welcome experimental edge of Perfect Symmetry seems to now be a thing of the past however, and if that album was a tentative step forward, Strangeland is a chastened leap backwards. So we get twinkly piano chords, smooth production, lyrics that seem to be applying for a new definition for the word ‘banal’ and, worst of all, a lack of memorable songs.

For, say what you want about Keane, they’ve always managed to produce at least one killer tune per album: think Somewhere Only We Know or Bedshaped, think Is It Any Wonder, and of course think Spiralling. For Strangeland though, chief songwriter Tim Rice-Oxley is badly treading water here, with all 12 songs fitting cosily into either a solid, mid-tempo pace or slow ballad.

Rice-Oxley does know how to write a decent ballad though – Watch How You Go is a genuinely touching break-up song, Black Rain is spookily atmospheric, while Neon River is the one track that harks back to some form of experimentation – all eerie electronica until it slowly unfolds into… yet another Keane song. On The Road aims for Arcade Fire-style euphoria but falls dramatically short and just ends up grating on the nerves.

While the melodies are stodgy and predictable, the lyrics don’t help a great deal. Although Sovereign Light Cafe touches a chord with its unashamed nostalgic look back at times gone by, and the aforementioned Watch How You Go is actually quite affecting, there’s a whole bucket of cliches piled in to these tracks.

It’s like Rice-Oxley has heard a few Bruce Springsteen albums but not noticed the subtlety and battered glamour. Silenced By The Night sees Chaplin telling us that he’s “got the radio on, got the wheels in motion”. Opening track You Are Young (which does, admittedly, have a pleasingly anthemic quality) finds Chaplin asking of someone: “lie still beside me and hold me forever”. Disconnected talks of walking in circles, and the blind leading the blind. Nothing particularly offensive, just a sense of the band phoning it in.

While Keane have never been an outfit to look to if you want a bit of edge, some passion would be nice – or at least, a few more poignant moments like Somewhere Only We Know seemed to generate. As it is, Strangeland stands as proof positive that playing it safe is not always the best option.