Keane – Under The Iron Sea 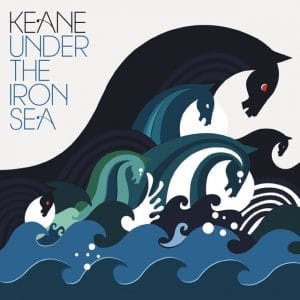 Like the choirboy who discovered rock music and started wearing a hoody, Keane are keen to shed their nice boy image and up their Trump Card cool rating from a one to a 10. But wait – won’t their earlier fop-pop exploits allow the movers and shakers to dismiss them as saccharine Susans forevermore? Well, probably, yes; but that’s not really the point, is it?

The point is that, for a band who could quite easily peddle head-bobbing, radio-friendly ditties and rake it in for the rest of their careers, Keane have approached second album syndrome with a bold and admirable demeanour: out go the bedroom poster anthems (for the most part, anyway), in comes a stirring cinematic formula (comparatively speaking, anyway).

Recent single Is It Any Wonder? (the backbone of which surprised even long-term Keane fans) is by no means a fluke. It is, in fact, a fair reflection of the tracks offered by Under The Iron Sea: more credible, more believable, a soundtrack to more complex moments than sunny day sing-alongs or emo-rific moping.

It would appear that Tim, Tom and Richard have spent some time at the U2 School of Squillion-Selling Records, their final project sounding more expansive and dramatic than Hopes And Fears ever did.Stadium-sized if nothing else, you could switch Tom Chaplin with Bono and nobody would notice.

And the tracks themselves? Well, you have the obligatorily broody opener in Atlantic (sounding like Tim and Richard’s attempts to exorcise Tom with Massive Attack-shaped rosary beads – he hangs on for dear life, if you’re interested); Nothing In My Way sees the classic Keane recipe drawn through mild distortion, the vocal suitably maligned; and Leaving So Soon? is all kick drums before somewhat disappointingly turning into a Hopes And Fears cast off.

And therein lies the problem: for all their honourable intentions, Keane manage to stretch the shackles of piano pop rather than break them completely. A wise move, perhaps, should they have one eye on their burgeoning fan base, but ultimately half-measured in a purely musical sense: the stall they set with Atlantic – and then again with the gloriously dark The Iron Sea (which wouldn’t sound out of place on the Pet Shop Boys‘ morbid Battleship Potemkin soundtrack) – is never followed through with the same conviction; the LP’s frequent highpoints are tainted ever so slightly by the wish they’d gone just that little bit further.

That said, they are able to match Coldplay‘s very best ballads with the mournful Hamburg Song (sure togo down as a huge live favourite), and even show a willingness to tamper with time signatures in Broken Toy. The latter is so good, in fact, that it’s a wonder they didn’t prick up their ears and run with it a little more: the progressive meander towards the end is an environment altogether too infrequently visited by Keane.

I suppose it’s no great surprise in the end, then, that a band so popular (and exposed) following their debut album should fiddle with their formula enough to sound fresh, but not so much as to alienate their far-reaching following. The few moments of true originality serve to both excite and frustrate, rendering Under The Iron Sea an interesting and yet ultimately flawed offering. Nevertheless, it’s a great follow-up that could have been so much worse (and a little bit better).