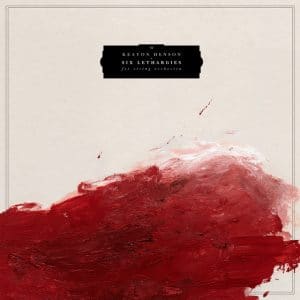 Keaton Henson is the sound of sadness, of anxiety, of pain, of abject, unparalleled depression – filtered through a piano and a guitar, spoken aloud when we ourselves just… can’t.

This is meant, of course, in the most complimentary of ways. Anyone who has struggled with their mental health has to but Google a picture of Henson, and it’s there – a rake-thin wiry frame, bearded, with that look in his eyes. Famously, the singer wears his heart on his sleeve and bravely uses his poetry, his careful music, his lilting sadness to draw us in and hold our hands, stoically saying: “It’s ok not to be ok.”

This is the universal theory behind his prior releases Birthdays, Romantic Works and Kindly now. Careful and sparse lyrics interlock with careful piano work, less of a battle cry and more of a whisper of acceptance, all of it guaranteed to communicate with those of us who battle the heavy weight of temporal ennui.

Six Lethargies is an expansion on this theme. Withdrawing from society and obsessed with the relationship between music and emotions, Henson spent his time building art and translating it into music, consulting psychologists, music theorists and neuroscientists on just how music can move us. Eventually, he split his work into six tracks of around 10 minutes apiece, and Six Lethargies was born into the universe with a flutter.

The music itself is entirely orchestral. Opening with swirling, cyclical violins, Initum is akin to falling down a rabbit hole, but with Henson at our side. Right into the belly of the beast we’re drawn, with volume and vigour, until calmly we’re deposited into the waiting arms of The Falling, a careful tiptoe along the edge many of us have contemplated that descends into a frantic anxiety dream. Trauma / In Chao underlines the relentless, background drone of surviving trauma – building to an explosive finale.

We drop further still into Unease Concerto – Cadzena, aptly named as jumpy violins alone send skin shivers ablaze, and on into Unease Concerto, which scoops up these violins and integrates them into a euphoric exchange of this nervous energy, becoming a beautiful orchestral piece which then returns us back to unease just as quickly. Lament is our lullaby, carefully moving into the final track Breathing Out, during which slight violins help us expel the narrative demons we have fought.

The first outing for the album, at the Barbican, involved wiring up the audience to a set of lights that changed based on their emotions. Thus, they became the show and Henson, watching carefully from the audience, opened up Six Lethargies to reactions outside his own.

That’s the ultimate stroke of genius behind the music on this album. It’s immersion; equal parts exorcism and catharsis. A scream in a crowd and a yell into the darkness. It’s an expression of what we should all do with our trauma, which is open up, share, and react to each other with the greatest of support. And that is so unbelievably beautiful, we’re left at the end with a single phrase. Thanks, Keaton. Thanks.