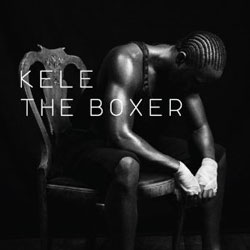 It’s become almost voguish for members of bands to reveal that their music tastes are somewhat removed from the music they make with their mates. In nearly every interview he ever did, Bloc Party‘s Kele Okereke (he’s dropped the surname, Madonna-style, for this debut solo release) seemed to mention his love of modern R&B or dance music, and though his band’s output did dabble in dance music especially, it never quite matched up to the bluster.

The Boxer should change all that. Co-produced by Spank Rock‘s XXXChange, it’s an album that cherry-picks the best elements of the current dance scene – garage, distorted electro, house – and moulds them around some of the best songs of Okereke’s career so far. For the ardent Bloc Party fan this shouldn’t be a problem, but the casual listener may find the opening salvo of Walk Tall and On The Lam hard to take. On the former, over skittering beats and echoey drum noises, Kele delivers an impassioned, effect-laden vocal that sets out his stall from the off: “Forget where you’ve been / Cut your ties to the past and wave it goodbye”. It’s not quite, “thanks for the last few years guys, it’s been fun, but I’m bored now”, but it’s not far off.

If Walk Tall hints at a new sound (and those giant, hoover-esque synths aren’t your typical indie-rock affair), then On The Lam delivers it wholesale. Over a bouncy garage beat reminiscent of an MJ Cole production and with Okereke’s voice pitch-shifted to sound like a woman, it’s an unsettling, mildly confusing but breathtaking highlight. The early triptych of curveballs is cemented with single Tenderoni, which fuses a four to the floor beat to a brilliant chorus and even manages to overcome the fact it sounds a lot like Wiley‘s Wearing My Rolex.

After a breathless start, the album enters slightly more familiar territory with the guitar-led The Other Side. But even when he heads back towards what he knows best, the results are never less than interesting. Midway through, the skipping beat and guitar strums drop out suddenly and a weird, high-in-the-mix voice emerges with a “ugh-huh” noise that makes you stop and check you weren’t imagining things. Casual fans may also take comfort in Everything You Wanted, which marries brilliant percussion with a chorus as sky-scraping as anything from Silent Alarm.

Another of the album’s trump cards is Rise. Building slowly around a twinkling keyboard figure, Okereke pleads with unnamed listeners to wise up (“Brothers, sisters, can’t you see / That you are stronger than you think”), before all hell breaks loose, musically speaking, and the whole thing erupts into a Josh Wink-style climax that won’t fail to cause muscle spasms.

Whilst much of Bloc Party’s recent musical output seemed hampered by indecision and agitation, The Boxer is loose-limbed, electronic yet human and, most importantly, full of the experimentation and genre-blending Okereke always claimed to love. It feels like a genuine reflection of where he’s at, as opposed to a compromise. It’s an aggressive record in many ways, but The Boxer deals each blow with a finesse that’s surprisingly subtle.