by Talia Soghomonian
published: 17 May 2010 in Album Reviews
Tweet 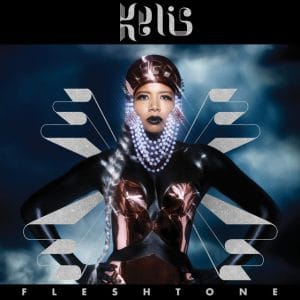 Transition for artists is often a risky business. The Black Eyed Peas successfully made the jump to Eurodance last year, while Madonna tests uncharted musical waters on every album. For Kelis, the risk is even greater. This oft underestimated diva broke new ground in R&B a decade ago, defying the genre with Kaleidoscope. On her fifth album Flesh Tone she redefines her sound, teaming up with producers will.i.am, Boys Noize and the ultimate Eurodance icon David Guetta to make her own confessions on a dance floor.

Who said electronic music was cold and lacked emotion? Kelis’ husky voice conveys her innermost feelings and never allows the synthesizers to upstage her. While the Peas’ Eurodance album The E.N.D. took a rather aggressive approach, Flesh Tone is multidimensional. Its rich layers uncover pulsating hooks and infectious beats. Think a cross between Giorgio Moroder-era Donna Summer and ’90s dance music and fast forward a couple of light years. As she announces on opening song Intro (not to be confused with an actual intro, for this is a full-length song): “We control the dance floor.”

If the first single Acapella is anything to go by, gyrating staccato beats have the intention of throwing you into a groove. Kelis’ take on electronic music soars high and creates a mood, often sci-fi, almost always carnal and incessantly exuberant. 22nd Century ushers in an exhilarating sound that gradually builds up, and this is a crucial part of all the tracks. The space age synths on Home cut like a blade. Its bold beats makes you want to go clubbing and dance your troubles away, much like 4th Of July (Fireworks). Melodies alternate to create three sings in one.

Madonna seems to have been an inspiration. “Let’s get to it/ Now you’ll prove it” channels Vogue in Scream. The track grooves at 200bpm and unleashes her emotions: “Stuck in a race in the wrong line… And I haven’t had faith in a long time” are the sort of lyrics which reflect her inner demons. “Emancipate yourself,” she repeats on the anthemic Emancipation, which could have been an old Madge track, reminiscent of a disco remix of Express Yourself. The frenzied rhythm of the staccato synthesizer is sure to get audiences going.

“I was super cool but now I’m super strong,” reveals Kelis on Brave, perhaps the most personal track on the album where she refers to her divorce, her self-rediscovery and her baby son, whom she credits as her saviour: “Had a baby, he’s amazing, he saved me.” Produced by Benny Benassi, Brave is one of the paramount moments on the album with its sharp synths and fuzzy electronics. The album closes with Song For The Baby, dedicated to little Knight who will surely grow up to be grateful, like us, that his mother didn’t sing him a soppy love song instead.

The production is pristine, the sound is flawless and Kelis, despite leaving diehard R&B fans behind, proves she’s at the top of her game. On this evidence she could turn her hand to doing a heavy metal album and still get it right.