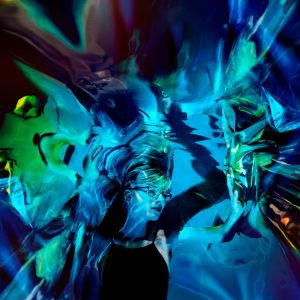 There is a formula of sorts for many of these tracks: the sonorous metallic tones of the prepared piano ring out on their own before being joined by lingering pads, which give the whimsical motifs body and swell to create a subtly epic climax. Daniel Lopatin co-produces a few of the songs, but apart from a very Oneohtrix Point Never synth at the end of Water Music his contribution is unnoticeable.

Sometimes the pads mark out a chord progression – when complementing Helix’s entracing ostinato, for example – but in the case of album centerpiece Nereid the accompaniment is considerably more droney. Moran’s scalic riffing takes on an otherworldly modal quality when fused with this psychedelic backdrop, and as a result Nereid is a real highlight. Halogen strips these special effects right back, leaving a highly intricate piano performance that shows Moran’s full talents. The album could have had more moments like this, as the formula of the more simple tracks can become a bit predictable.

There is certainly something ethereal about the walls of sound being created here though, the stagnant pads, the twinkling keys on top and the interplay between them. The album ends with the most minimal performance, sparse sustained chords throughout, and as the warm bassline and overtones fade out the calm remains. Ultraviolet could have had a little more variety in its seven tracks, but it remains an impressive outing by this multi-talented new artist.