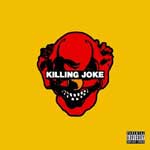 Killing Joke need little introduction to followers of the alternative and avant-garde. They were the Joy Division with balls who gave us classics like Wardance and Love Like Blood, who inadvertently influenced the industrial music genre and even inspired Nirvana‘s Come As You Are (check out Killing Joke’s 1984 track Eighties for confirmation).

Given that Killing Joke have been periodically releasing records for the past 23 years, it seems a little strange that there is such a buzz surrounding this release. Maybe it’s because it’s the original, principal line-up of Jaz Coleman (classical music scholar), Youth (hot-shot producer) and Raven recording together again. Or maybe it’s because the ex-Nirvana, Foo Fighting, uber session drummer, Dave Grohl, has pounded the skins (how’s that for a delicious twist of irony?).

Whatever the reasons, this album deserves the hype for this is the record that Killing Joke always sounded like they had in them. The template remains broadly the same as that of old, albeit leaning more towards heavy metal territory, but there’s a hunger, an urgency and a spirit that is lacking in many bands half their age.

The years certainly have not dampened any of Killing Joke’s aggression, skill or political commentary and these elements have been expertly harnessed by producer Andy Gill of Gang Of Four fame.

There are numerous highlights. Opener, The Death & Resurrection Show, is a seven-minute barrage of chugging, militaristic guitar riffs, an insistent rhythm and Coleman’s wondrously gruff vocals. Asteroid is a supercharged, industrial metallic stomp that shows us exactly where the likes of Ministry came from. Recent single Loose Cannon is another technicolour lesson in controlled mayhem, while Seeing Red goes easier on the adrenaline rush in order to deliver a chorus destined for the stadia.

Of course, no Killing Joke review would be complete without a look at Mr Coleman’s lyrics. The self-confessed misanthropist has a lot of spleen to vent, whether it be against ID cards and Big Brother politics (“silent weapons for a silent war”), capitalist greed (“five corporations earn more than forty six nations/you’ve got blood on your hands”) or the warmongers of the West. Total Invasion captures him at his most articulate:

Terrify them, complete submission
This is our goal, this is our mission.
Destroy your customs, you’ll have no say
We’ll clothe your women in the Western way.

A quarter of a century after they started in Notting Hill, Killing Joke seemingly have more to say of relevance than ever before. The current mainstream climate also appears to be one that is willing to embrace heavier music to its bosom, giving special attention to the pioneers. Bizarrely, Killing Joke’s time is now…