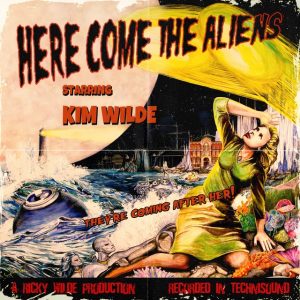 Sticking incredibly close to her ‘80s roots, Here Come The Aliens is a pleasantly palatable affair that uses supremely heavy and overt pop-tastic layers to bring Kim Wilde screaming back into 2018 – with a mixture of results.

Wilde continues the thematic, family-centric effort of her previous outings, with her brother Rick Wilde on production duties, with her niece featuring too. The only difference between here and past releases is the sheer power – almost to the point of being satirical, especially the striking guitar flourishes in opener 1969.

Now, the main concept behind Here Come The Aliens is – oh yes – a visit from UFOs. This Wilde claims happened in her Hertfordshire garden. But, believe her or not – and is she serious or not? – there’s still merit to Wilde’s work here, and the confidence with which she executes it is utterly palpable.

1969’s use of sampling sets an almost drag-like tone, creating an instant earworm that buries itself deep inside – much like Wilde trying to score a musical based on her extraterrestrial experience.

Yet it’s not all centred around this eyebrow raising subject matter. Throwing the thematic opener aside, Pop Don’t Stop is a homage/tribute to the genre that gave her a career, and is a paint-by-numbers of how it should be done. Twinkling piano introduces the track, while Wilde sings about her relationship with the genre, giving it the position of a partner in crime that you know yearn for.

The first sign of it waning is on Kandy Krush, which could be either a tactical spotlight on the device-centric society we now live in, or a return to the UFO visit. Either way, there’s absolutely no change in the barreling poptacular showcase we’re by now a part of.

And on it does barrel. The pop machine continues churning out track after track, proving that Wilde certainly does still have a knack for writing pleasing songs. But, flowing like a thick, melodic river that threatens to drown you every so often, it borders on being too much. Imagine binging on your favourite sweet treat, relishing in the happiness, but then all of a sudden… you’re taken down by the realisation that it’s both going to end, and probably not well.

Rock the Paradiso is how you’d imagine a holiday camp to portray a stereotypical rock band, but yet again the whole thing feels like the soundtrack to a musical. In which case, it wouldn’t  actually be that bad because it’s expected. But when you realise this is a standalone album, by an artist who is many-a-decade deep into their career, it then seems a bit… cheap.

Finale Rosetta is an ethereal track that feels like a break that took maybe six tracks too many to appear. It would’ve served as a perfect mid-way point – a palate cleansing sorbet, if you will. Offering more context to Wilde’s position on the subject matter that spawned the album in the first place, the chorus’ call of “What is this previous thing called life?” sends the theatrical idea screaming into the West End and feels a bit too obvious.

All in all, Here Come The Aliens is a lot of ideas in one package, and that’s by no means bad. It’s just a lot to unpack in one sitting, and the frequent use of samples can often take away from the experience. The artwork’s cool though.