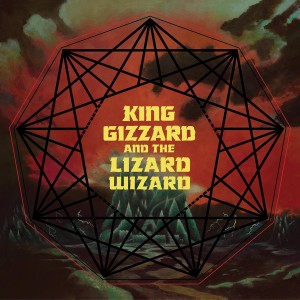 ‘More is more’ seems to be the philosophy of seven-strong Aussie psych-rockers King Gizzard And The Lizard Wizard, encompassing two drummers and enough harmonica, guitar and synths to give the best of regular prog bands a run for their money. Not that King Gizzard are a regular prog band, encompassing elements of ’60s psychedelia, garage rock and balls-to-the-wall gonzoid jams. And Nonagon Infinity is their third album in a year.

Opener Robot Stop sets the template for the whole album; a dense chugging train like structure of a song, as the listener passes through carriage after carriage of oddities, solos and sonic attacks. It is incessant, and bonkers fun. This track neatly segues with gleeful abandon into Big Fig Wasp and the pace doesn’t let up.

Actually the whole album plays out in one long segue with each track melting into the next. Riffs and melodies appear, become sublimated and reappear later, as if old friends guiding the listener through the experience. Eventually it culminates with finalé Road Train, which loops back into Robot Stop in a potentially never-ending vortex of soundscapes. As frontman/guitarist Stu McKenzie says: “I wanted to have an album where all these riffs and grooves just kept coming in and out the whole time, so a song wasn’t just a song, it was part of a loop, part of this whole experience where it feels like it doesn’t end and doesn’t need to end.” Such creative conceits are not unusual for this band; they once recorded an album where every song was exactly 10 minutes and 10 seconds long.

It all sounds ridiculous on paper, but this is no Woodstock-era pastiche, and while tripping through the outer rims of the Jamiverse could easily become tedious rather quickly, there is structure in the chaos, darkness coupled with a sense of fun and memorable hooks a plenty. Single Gamma Knife worms its way into the head effectively, buoyed on a sea of whooohs and harmonica riffs, while Evil Death Roll and Wah Wah are also potential sing-alongs.

The pastoral acoustic leanings of previous album Paper Mâché Dream Balloon have been left behind, in favour of breakneck Ramones paced drumming and Keith Moon style fills from the double pronged attack of Michael Cavanaugh and Eric Moore, twisting their blend of Hawkwind and Canned Heat with dirty garage riffs. When the pace does slow, as on Invisible Face, things take a detour via their metaphorical jazz lounge. The way the vocal line follows the guitar is particularly Frank Zappaesque. Perhaps the most psychedelic song on the album is Mr Beat, which drifts along on a Beach Boys style backing of Hammond organ and quirky treated vocals, evoking blissful feelings of floating away.

But it’s not long before the robot riffing and chugging bass lines pick up again in earnest. Given the variety of sounds on the record and standard of musicianship at play, this approach never wears the listener down. A whirling dervish of an album, and a culmination of all their previous hard work, Nonagon Infinity is the sound of a band at their wigged out best.