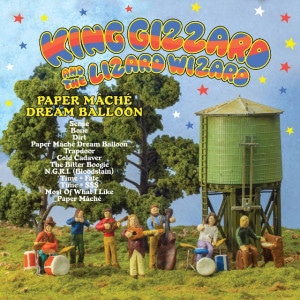 Ah, the charity shop vinyl trawl. It’s your natural habitat: you, the hunter of rare and esoteric grooves, knelt ‘neath shelves of bric-à-brac, searching for bargain gold among optimistically-priced dross.

For so long now you’ve been met with disappointment. But what’s this colourful object tucked between James Last and a water-damaged copy of Paul Young’s No Parlez? Intrigued, you pull the sleeve out.

It looks perfect: that rainbow-striped bubble writing, those multi-coloured stars and the little model band on the corner of a farm, looking for all the world like an Oliver Postgate impression of the Glastonbury Fair… And that title: Paper Mâché Dream Balloon, by King Gizzard and the Lizard Wizard; surely you’ve chanced upon some lost psychedelic classic?

You’d search for more information online, but there’s always been no signal at this end of the high street. Mind you, it’s only £3 – surely worth foregoing a latté – so you take a risk. At home, after closer inspection, it turns out you’ve been duped. Hoodwinked. It’s from 2015, not 1968. Aggrieved and a few pounds down, you toss the record on the ‘to eBay’ pile.

What you actually had there, however, was a bit of a gem. The seventh album in their relatively short career, Paper Mâché Dream Balloon sees these Melbourne-based neo-psychedelicists eschew the motorik churn of 2014’s I’m In Your Mind Fuzz or this year’s Quarters, trading fuzzed-out whorls for a more pastoral, mellow style – earlier explored (at length) on the jazzy The River, the first of Quarters’ four 10-minute sojourns.

Gone too is the deliberately thin, straight-to-tape sound of their previous output, perhaps despite – according to lead vocalist/guitarist and flautist Stu Mackenzie – the album having been recorded in an empty shipping container on his parents’ farm in Victoria.

There was a strict no electric instruments rule in the sessions, but rather than woody strum, there’s plenty of colour and tone from the off, thanks to the variety of other instruments in the seven-piece’s armoury: Sense’s opening minor sevenths give way to serene, serpentine clarinet, while Bone and Dirt are buoyed by wheedling flute.

Rather like the excellent album-and-a-half recorded by XTC in their The Dukes Of Stratosphear guise (or perhaps The Young Ones tie-in Neil’s Heavy Concept Album), there’s a reverent irreverence to the pop-psych pastiches here. Our ardent crate-digger could happily while away the short running time collecting references: the whimsical title-track and Cold Cadaver let in hints of Traffic’s Hole In My Shoe and Paper Sun, there’s Canned Heat under The Bitter Boogie (with a brilliant slackening-string lead guitar) and a touch of the gleefully wrong intervals of Cardiacs on the circular Time Fate.

But the songs are a little more than insubstantial homages. Sense decries the senselessness of la vie moderne, while there’s a playful menace to Trapdoor’s roiling paranoia (“Everybody knows what’s under the door, And everybody goes to great lengths for sure, To hide themselves away”).

It’s a lot of fun, for band and listener both (not always the easiest of tricks) – a ‘concept-less concept album’ shot through with just enough self-aware humour: see the happy-days-toytown instrumental closer, where songs’ melodies are reprised and the entire album is rewound at high speed before exploding. Perhaps it’s the balloon, finally bursting inside the gluey-newspaper globe? This is nothing like as hollow. Authenticity be damned: it’s a keeper.