King Krule – 6 Feet Beneath The Moon 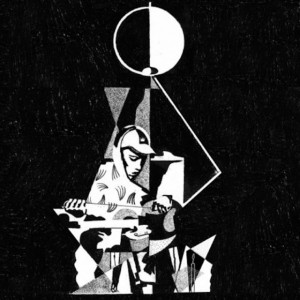 For those who have followed King Krule, a.k.a. teenager Archy Marshall, since he first started releasing music under his previous guise of Zoo Kid, it has been a long wait for the teenager’s debut album. The Londoner, who perfected his skills at the renowned BRIT School in Croydon (see also: Adele, Katy B, Kate Nash, the late Amy Winehouse), started recording music when he was just 11, but it was his debut single Out Getting Ribs – released in 2010 under the Zoo Kid name – that really got tongues wagging.

Ever since, Marshall has slowly and quietly gone about his business, building up a reputation as one of the most talented young artists around through his captivating live sets. The release of his debut self-titled EP under his new moniker of King Krule in 2011 only confirmed just how good Marshall is, with songs such as Portrait In Black And Blue demonstrating the kind of world-weariness expected from someone twice his age.

Unsurprisingly, King Krule was listed among the names touted at the start of this year as one of the ones-to-watch, with critics nominating him for the BBC Sound of 2013 poll. But does 6 Feet Beneath The Moon, which is released on Marshall’s 19th birthday – a Saturday – live up to the expectation?

The answer is, most definitely. From the very first burst of his now trademark growl, Marshall’s command of his craft flows through the record and his mesmerising tales of discontent. The album opens with the fantastic single Easy Easy, a simple song that revolves primarily around Marshall’s distinctive guitar work, with a solitary riff providing the platform for his deep baritone vocal. “And easy come and easy go/ we aren’t true I told you so,” he sings, with the sort of raw emotion that makes his music so incredibly intoxicating.

Border Line continues the strong start, with its beautifully melodic chorus lifting off from Marshall’s jaunty guitar riff amid a haze of broken beats, much in the same way as the enchanting The Noose Of Jar City from the King Krule EP. Foreign 2 is grittier, with its frenetic production capturing the fast-moving pace of city life, while Baby Blue strips everything back to just a dreamy, delicate guitar riff and Marshall’s captivating vocal.

Ahead of the album’s release, Marshall debuted 6 Feet Beneath The Moon as a rolling, non-stop stream on his website, accompanied by CCTV footage for each song. It was an ingenious and fitting concept, one that makes more and more sense as the album progresses. “My concrete bed beckons and can you hear me?” he muses, on the sprawling Cementality, which further explores his affinity with London and all its idiosyncrasies.

While his throaty vocal will not be to everyone’s taste – some love it and others find his snarl rather off-putting – there is no doubting Marshall’s range as a musician. The jazz-infused A Lizard State displays the most urgency of anything on the record, with its rumbling beat and intricate guitar riffs interspersed by a skittish burst of brass. Then there’s the contrasting Neptune Estate, a drifting, melancholic masterpiece, drenched in reverb and dub beats.

The album is slightly indulgent at times – as well as a couple of tracks too long – but the end result is still hugely impressive. Songs such as The Krockadile and Out Getting Ribs are further proof of his beguiling talent, showing exactly why Marshall can count Frank Ocean, Tyler, The Creator and even Beyoncé among his fans. Delivering on all his potential with the sort of nonchalance and assurance we’ve come to expect from the young man, 6 Feet Beneath The Moon is a special album, from a special artist.