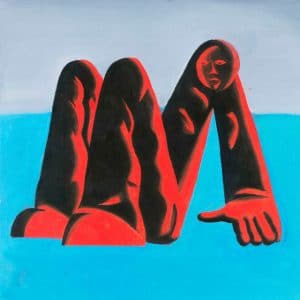 King Krule – Archy Marshall to his mates and his mom – stumbled onto the scene with 2013’s engaging, witty 6 Feet Beneath the Moon, which immediately set him apart from what anybody was doing, save for a few Bandcamp artists who’ve avoided the kind of mainstream attention Marshall’s achieved in the seven years since.

His signature sound, a nocturnal blend of hip-hop, synthesizer sounds, jazzy punk and oddball vocalisation immediately brought to mind earlier experimentalists and genre-benders like Damon Albarn and Ian Dury and Sandinista-era The Clash. Songs like Easy, Easy and Out Getting Ribs made him a name you could drop, and his next record, the infinitely better The Ooz, made him a name you could shout about.

The Ooz, released in 2017, earned Marshall a much wider fanbase and a considerably bigger raft of critical plaudits. It added trip-hop depths and R&B smoothness to his already-distinctive sound, and ended up scoring very highly on ye olde Metacritic (aided in no small part by an excessive 9.0 from everyone’s favourite tastemakers).

So here we are, three years later, and Marshall is almost back to where he started. The momentum has dissipated, the hype is faltering, and the tunes are lacking. The music on Man Alive! leaves a lot to be desired, despite some cracking tunes. The narrative goes that this is his ‘settling down’ record. Every artist who makes music into their 20s inevitably has to face the idea that their life is tangibly expiring in front of them, and that marriages and love and children and ageing and lethargy are all part of the deal. Some artists revel in their first experiences of maturity and continue to expand their sound – David Bowie, Grace Jones, Brian Eno, Stevie Wonder, Sleater-Kinney, PJ Harvey – while others completely cave in to the increasing pressure and are content to play it safe (pretty much any rock band that the NME get behind).

Some artists, such as Paul McCartney, play around with the very notion of domesticity to their own artistic benefit (Ram is probably his greatest achievement outside of The Beatles). But the truth is, Man Alive! just… is. It’s not a catastrophe, nor does it attempt to display artistic growth in any way. It doesn’t even play it safe by retreading the same ground as The Ooz. It’s just a guy, with some songs. Alone, Omen 3 plays out across rainy-day psychedelia that splits the difference between downtempo Gorillaz and Massive Attack. Cellular again evokes Gorillaz – not the neon-lit, bouncing sound we all know and love,  but the crepuscular, weary one we all try to forget. Tenderness and simplicity is offered on The Dream and Perfecto Miserable, which both temper the horror of the more bitter tracks with their soothing emptiness.

The sole highlight is the Ooz-evoking (Don’t Let The Dragon) Draag On, which needs no explaining. If you know, you know. It’s everything that you loved about The Ooz, condensed and then dried and then rehydrated and then served. It’s a masterwork of autosarcophagy. This is not a great record by any stretch – it’s not a poor one either. It just feels a little… low-stakes? For someone as forward-thinking and experimental, playful and funny as King Krule, Man Alive! is just too dull of a work to celebrate.