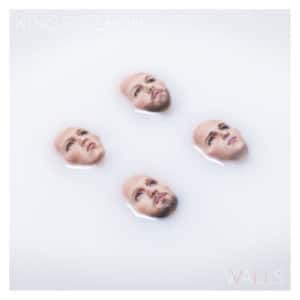 Back in 2003, when Kings Of Leon were still finding their feet as a band, the picture that adorned their rough and ready debut LP, Youth & Young Manhood, was of the quartet joined together in a mess of long shaggy hair. As time passed and the Followills saw their popularity skyrocket – especially on the back of 2008’s commercial monster Only By The Night – both their image and sound became increasingly cleaner.

It’s somewhat fitting, then, that the artwork for their seventh album, WALLS, is a polished take on that original cover. Instead of the ramshackle look of their early days, the 2016 version sees the Tennessee four-piece represented by perfectly crafted, hairless doll-head replicas of their faces, separated by a milk-like liquid. Yet despite appearances, Kings Of Leon’s latest effort is far from a straightforward retread of their uninspired recent releases.

By the band’s own admission, the success they achieved post-Sex On Fire had a major impact on their relationship and the music they produced as a result. Come Around Sundown and Mechanical Bull indulged far too readily in the anthemic rock that had shot Kings Of Leon up the charts. In fact, guitarist Matthew Followill summed them up rather neatly recently when he said: “I feel like we floated through a few albums, maybe.”

That sentiment does not feel applicable to WALLS (apparently an acronym for We Are Like Love Songs), though, as demonstrated by lead single and opener Waste A Minute. From the opening guitar intro, the song goes about its business with purpose and, while the chorus does slip into some of the habits of old – including a few very deliberately placed woah’s – it is charmingly infectious as Caleb Followill bawls: “Take the time to waste a moment.”

Like the rest of the record, there is a balance on the track between the Kings Of Leon from the first three albums and the one from the second stage of their career. Find Me provides further proof of this trade off between new and old, delighting in a rollicking guitar riff before bursting into a meaty chorus, while Eyes On You also manages the crossover well as it rumbles along to another one of the band’s now signature big choruses.

However, WALLS is at its best when it throws something different into the mix. Although Kings Of Leon don’t do anything particularly drastic here, there are some intriguing new additions to their repertoire. Around The World has a funky bassline and a sunshine melody that slightly tweaks their stadium rock – even if the lyrics are a bit cheesy (“Keep dancing, like it’s ya last time”) – and Muchacho is a surprisingly poignant highlight.

Then there’s the beautifully understated Conversation Piece, which Caleb wrote for his wife following her change of mind over a dream move to California. It’s indicative of the personal themes that run throughout WALLS, with the brooding and atmospheric Over taking the band to darker places than they’ve ever been before. “My angel hovers over, the light comes crashing down and I know this is how this story ends,” sings Caleb.

Despite tackling some of the troubling issues that have plagued Kings Of Leon in recent years, there is an unmistakable ease about WALLS. Yes, there are still a few clumsy attempts at the arena-filling rock formula of previous efforts – most notably on Reverend and Wild – but even then they sound more comfortable in their own skin, with the minimal piano-driven title track concluding the album with a final confident flourish.

Those who long for the days when Kings Of Leon were an enthralling and joyously shambolic rock band will probably be disappointed again by their return. However, the Followills are not the same people they were back then and while the transition has not always been smooth, their seventh effort is the closest they’ve come to bridging the gap. It’s not perfect, but it does point towards promising a future.