Kings Of Convenience – Peace Or Love 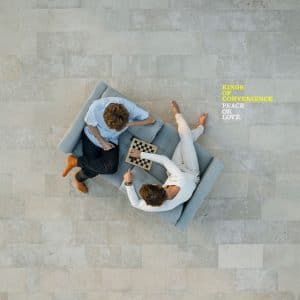 Kings Of Convenience have been on hiatus for 12 years, but from the first note of Peace Or Love, it feels like they’ve never been away. The Norwegian duo were at the forefront of a ‘new acoustic’ movement when their debut album Quiet Is The New Loud was released in 2001, paving the way for polite young men in sensible shirts like Turin Brakes, David Gray and José González to soundtrack dinner parties for the next few years.

Over the next decade, Erlend Øye also fronted his own side-project, The Whitest Boy Alive, and worked with artists such as Röyksopp and Schneider TM. After reviving The Whitest Boy Alive back in 2019, he’s now recalled his fellow King, Eirik Glambek Bøe, and we have the belated follow-up to 2009’s Declaration Of Dependence.

Pretty much from the first note of Rumours, it’s clear that Øye and Bøe have slipped very easily back into their old ways of working. This is an album full of wistful, hushed vocals, gently plucked acoustics and some beautiful harmonies. No alarms, no surprises (unless you count a few surprising moves into bossa nova), but it does make for a lovely listen.

In the seemingly continued absence of foreign holidays, it’s easy to close your eyes and imagine this as a soundtrack to sipping some wine on a hotel balcony while the sun beats over your skin. The gentle strings and intricate little guitar riffs on Rocky Trail are like audio salve to a troubled soul, and Comb My Hair would be able to, in the nicest possible way, lull an insomniac to sleep, so soothing are Øye’s vocals.

The title is an appropriate one, as you get the impression that if it was a choice between peace and love, then Kings Of Convenience would choose the former. A duet with Leslie Feist, Love Is A Lonely Thing, is surprisingly dark and sad – “Love is pain and suffering,” Øye deadpans at one point – but the presence of Feist stops things from becoming too depressing.

Talking of love, there are some lines that may raise an eyebrow. Just as their signature song Toxic Girl railed against a woman who “every night, she kisses someone new, never you”, on Peace Or Love, the duo still seem to have issues with sexually liberated women. Angel talks of a woman who’s an “angel, even though she might be slightly promiscuous”. It’s delivered with a tongue firmly in cheek though, and never really spoils the beatific atmosphere.

Although the general pace is pretty slow, the more upbeat moments hint at a hitherto unexplored interest in bossa nova. Catholic Country (where Feist makes another welcome appearance) is slightly reminiscent of Everything But The Girl‘s first album, Eden, in its jazzy arrangements, while it’s easy to imagine the likes of Bebel Gilberto covering the swooning Fever.

Anyone who wrote off Kings Of Convenience as too twee or too languid the first time around won’t find anything to change their minds on Peace Or Love. There’s a unexpected air of bitterness to the final track Washing Machine (there’s talk of a “spoiled girl who’s never had to make up her mind” and Øye balefully delivers the line “go and find someone else” towards the end) but the whole album is so shot through with calmness and peace that you barely notice it. Whether the whole ‘new acoustic’ movement will have quite the same impact 20 years on is yet to be seen, but it’s certainly good to have them back.

Kings Of Convenience MP3s or CDs

Kings Of Convenience on Spotify