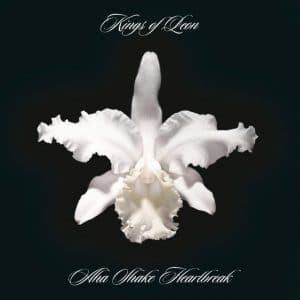 I can take or leave The Strokes. Hell, I can even live without The Killers and Constantines if push comes to shove. But the Kings Of Leon – now there’s some essential listening for you. Youth And Young Manhood revisited ’70s, deep south Americana to tremendous effect, soundtracking countless road trips and late summer nights. Aha Shake Heartbreak is even better.

From the opening chords to the bluesy swagger of bonus track Where Nobody Knows, the album perspires confidence. Vocalist Caleb Followill wraps his southern drawl around perhaps the greatest opening lines of any album on Slow Night, So Long: “Slow night so long, she’s frenching out the flavour / She’s 17 but I done went and plum forgot it.” He yelps.

King Of The Rodeo certainly comes close to being the best thing they’ve ever written, clambering forth with an irresistable lead riff and majestically indecipherable vocals, topped off with an almighty hook, complete with hand claps and cymbal clashes. Taper Jean Girl follows, morphing from a Rocks Off drum intro the Aha Shake hick-rock of the title’s promise, before Pistol Of Fire reverts to the barndance-gone-wrong, phallic-referencing on which Youth And Young Manhood rode into people’s hearts.

Milk, a brooding, almost Beck-esque Sea Change joint, seems to betray a wider range of influences on Kings Of Leon, which would make sense given the amount of touring time they’ve put in over the last couple of years. Gone is the hypothetical lyrical optimism of Molly Chambers; in comes the kind of jaded anti-climax that comes with living out a dream. Musically, however, a growing exhuberance is present, and exhibited beautifully by Milk’s pairing with current singles The Bucket – the best dancefloor filler since they last tried their hand at dancefloor fillers.

The second half of Aha Shake Heartbreak continues to molest your attention, complete with confirmation of our suspicions that Caleb would make a great yodeller (Day Old Blues), foot-to-the-floor, vigilante rock (Four Kicks – “You with your switchblade posse / I’ll get my guns from the south”) and lethargic, poetic ballad (Rememo), not to mention Where Nobody Knows’ adorable blues (“Come up to me said ‘Why you so skinny and pretty for a boy?’ / I said ‘Thanks for the insult and compliment, you’ll never forget my face no more”).

From a lyrical standpoint, the album is overtly sexual, and often uncomfortably so. References to “giggling virgins”, “perfect nipples” and even “pop myself in your body” are frequent (Soft is my new, all-time favourite song about erectile disfunction). Having said that, the Followill inflection, as ever, is difficult to comprehend at best. The boys’ exposure to the wider, wilder world sounds like it was a scary, if exciting, experience, but it may only be apparent here after some dedicated listening. They’re certainly older and wiser than the Wasted Time kids of years gone, and Aha Shake Heartbreak is certainly a vivid account of that process.

Youth And Young Manhood left the Kings Of Leon with somewhere to go, unlike an Is This It, for instance, and with Aha Shake Heartbreak they have found their projected target and gone a few miles more for good measure. It is an infinitely admirable and engaging effort from one of the best bands of the last ten years or more. Be good to yourself and pick it up as soon as you can.