Kings Of Leon – Come Around Sundown 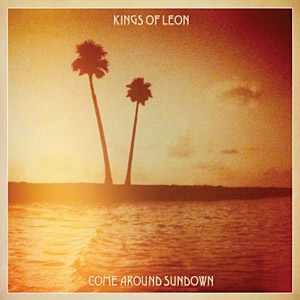 In 2010, Kings Of Leon bear no resemblance to the scruffy, bell-bottomed, mustachioed preacher’s sons who released the seminal Youth And Young Manhood only seven years ago. Gone are the days of drunkenly recording songs in one take and slurring the words to baffle the critics. Their Pentacostal backwoods backstory – once a primary part of their draw – is now swept under the rug. Come Around Sundown follows the band’s ever-evolving progression, and serves as a more than worthy sequel to 2008’s Only By The Night.

Certainly, the arena-rock sound of their last album alienated some long-time fans, but it also convinced 6.2 million people to pay cold hard cash for their record. Hipsters be damned, the Followill boys must be doing something right. And just like its predecessor, Come Around Sundown is pre-packaged with all the big reverb and shiny polish of an expensive arena stage show (and, if the boys keep this up, there’ll be a lot more stadium headlining gigs in their future).

The songs no longer sound woodshed-written or scrappy. The riffs are big and the beats tend to lean back and take their time, all the better to allow the reverb to slap around the sound field. Caleb Followill’s voice has lost most of its thickly muffled southern slur; now it’s all confident – if still slightly southern-fried – Bono-like showmanship. And behind him, the band takes their time and locks into intricate grooves with the prowess of much older, seasoned musicians. Considering the staggering (and staggeringly varied) body of work the Kings have put out in their short career, it’s not surprising that they come across as musically wise beyond their years.

There are plenty out there who will cite the Kings’ second brush with arena rock as an earmark of pursuing mainstream success at the expense of creative control (and indie credibility, for that matter). But Come Around Sundown is more than just a rehashing of what worked on Only By The Night. Kings Of Leon largely disowned their trashy southern heritage on that album, but this time round, they’re finding ways to incorporate it back into the mix (most notably on the fiddle-tinged Back Down South).

The opener, The End, sets the mood firmly in the same vein as 2008’s Closer; it’s an obvious indication that we’re not venturing too far off the edge of the map. But the little tacked-on piano coda indicates that maybe we’re seeing things through rose-coloured glasses this time round. Lead single Radioactive smacks of greatness, Followill wailing with the same abandon that made Sex On Fire such a huge hit. This time, though, he’s joined by a gospel choir. “It’s in the water. It’s where you came from,” he sings, ever escalating in intensity.

Other standout moments include the nearly bubblegum pop of Mary, sounding like what may have happened had Skynyrd seen their heyday in the ’50s. The slow-grooving The Face, finds Followill crooning, “If you give up New York, I’ll give you Tennessee, the only place to be”. No Money features a guitar line that sounds stolen from a song by The Walkmen in its jangly looseness, but by the time the band comes in, that’s easily forgotten in Followill’s lament: “I’m a waste of the living,” and “Am I just pissing around? Cutting loose in this fucking town?”

Come Around Sundown is not as easily digestible an album as its predecessor. Kings Of Leon’s newfound pop sensibilities often feel at odds with their southern-rock instincts, and while this may result in fewer immediately recognisable radio hits, it makes for a largely enjoyable batch of surprisingly invigourated tunes from one of American rock’s most unlikely mainstays. There’s a moment in the Acapulco-flavoured Mi Amigo when an exuberant Caleb Followill exclaims, “Good Lord, son!” with complete shit-kicking abandon. You can’t accuse the newly serious Kings of not having a good time.