Kings Of Leon – When You See Yourself 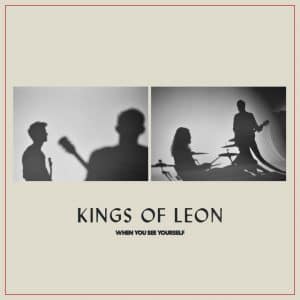 For many, listening to a new Kings Of Leon album these days is about as exciting as listening to a new U2 album (make of that what you will). When a band is this big, the margins between success and failure are so small that it seems like nobody knows whether they’ve released a great album or a poor one.

Their albums tend to receive middling reviews loaded with lukewarm praise, with nobody really willing to stick their neck on the line and describe why X album is any better than Y album, and even fewer willing to compare it to their finest work with any real conviction. However, unlike U2, Kings Of Leon have never released an album that could be called ‘perfect’, or ‘groundbreaking’. So the reluctance to declare any of their albums a success is confusing at best.

Most curious of all is that generation of rock fans that grew up in the era of the landfill indie disco, that were the first people to take Kings Of Leon to their hearts, seemed to have moved on to pastures new, with most of Kings Of Leon’s fans being made up of daytime rock radio listeners and the parents of said generation. For those amongst you that have stuck with the band through the highs, the lows and the plateaus, here’s the good news: this album is actually rather great, and it’s certainly the first album since Sex On Fire made them megastars that sounds like it was made by people who give a shit, not just millionaires looking for their next advertisement-soundtrack dollar.

From the gloomy title track that opens the album, through the nostalgic rush of Stormy Weather, to the gently rolling Fairytale (which actually sounds like what it must feel like to lie in a little boat, bobbing in the sun in the Caribbean somewhere), Kings Of Leon have clearly produced enough quality material to actually be able to sequence it in a way that allows the album to unfold, slowly but steadily telling the tale of how they got their groove back.

The soulful, streetwise strut of Golden Restless Age is one of the finest songs they’ve released in forever, and it’s wonderfully bumpered by the whisky-soaked heartbreaker Time In Disguise, and the hauntingly beautiful A Wave – which has some incredible guitar textures sewn into its fabric. Some curiously U2-esque moments crop up throughout the record too. Whether that’s the Brian Eno space-country ambience in Claire And Eddy, or the barrelling, barrel-chested post-punk shred of lead single The Bandit (this one will be on setlists for a while.)

Sometimes a band are popular because they’re a passing fad, or because they’re the sound of a zeitgeist, or because they have the weight of critical or record label support behind them. But Kings Of Leon are popular because they’re distinctive, they’re reliable and they’re still here, putting out great stuff after two decades while many of the bands they came up with have either burned out or faded away. At best, When You See Yourself is the finest collection Kings Of Leon have put out since their peak years, and at worst a collection of good tunes to listen to this spring and never hear again. That’s a win-win, no matter how you look at it.