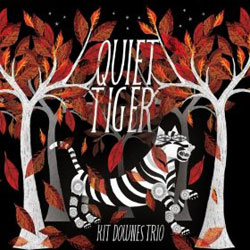 In the last few years pianist Kit Downes has played with a dizzying array of bands: Empirical, The Clark Tracey Sextet, The Golden Age of Steam, Troyka, Neon Quartet, duos with Tom Cawley and Alexander Hawkins, and his own trio.�This variety, common to many jazz careers, certainly turns out versatile players, but it can be bewildering for the record-buying public, and commercially counterproductive.�Basho were probably trying to make things less confusing by releasing Downes’s second album as leader under the Kit Downes Trio name: after all, this was the group nominated for the 2010 Mercury Prize and it would be foolish not to capitalise on the publicity.�The name is fairly misleading, however, as this is not a trio record in any strict sense, featuring James Allsopp’s reeds and Adrien Dennefeld’s cello on most tracks.

After a few listens, though, the nomenclature makes more sense.�The rhythm section do have a distinct identity: lithe, loose and separate from the reeds-and-cello textures, which Downes has said he wanted to sound like a “weird squeezebox”.�Though employed subtly, they enrich the album’s atmosphere hugely.�Used as harmonic drones on tracks like Tambourine and Attached, they recall E.S.T. (especially when drummer James Maddren’s beats get towards the rockier end of the spectrum); Tambourine, with its ostinato sections that build before exploding into bluesy bop lines, also comes close to the sound of another feted UK piano trio, Phronesis.

Downes has a distinctive compositional voice, however, and some tracks on Quiet Tiger would have fitted seamlessly on his debut Golden – In Brixen plays the same kind of harmonic games as that album’s Jump Minzi Jump – though his reference points have expanded considerably.�The album is bookended by Boreal and the title track, two reprises of the same theme evoking the Taiga Forest.�Darkly cinematic bass clarinet and plucked cello conjure woodland mystery as effectively as anything since Tom Waits‘ The Black Rider, before Downes adds a top line that remoulds the harmony into new shapes like a shadow puppeteer.�The spacious …With A View is very much in the spirit of Miles Davis‘s In A Silent Way, and features beautifully lyrical playing by bassist Calum Gourlay.

Downes’s touch is delicate and his lines economical: his expansively romantic side is reined in, and even the poignant trio piece Fonias feels more controlled thanks to a steadily pulse of left-hand cluster chords, with echoes of Jon Brion‘s film scores. The track Skip James is another masterclass in restraint.�In modern jazz piano, blues influences are often associated with letting loose, the flipside of more classically-influenced introspection – Keith Jarrett’s thunderous vamps being a case in point.�On Skip James, however, Downes draws inspiration from the legendary Delta bluesman to reclaim an older blues language that is thoughtful and melancholic. �Not that this album is buttoned-up: the trio track Frizzi Pazzi is straight bebop that allows the brilliant Maddren to get heavy, and The Wizards is a fiery feature for Allsopp on tenor sax, with an aptly shamanistic, minor-modal melody.�But no-one plays too much: Downes’s tunes are given the breathing room they deserve throughout.

Whereas Golden was a fairly unvarnished package, everything about this record bespeaks care and attention, from the warm production to the gorgeous cover art.�It could benefit from being a couple of tracks shorter: the running time of over an hour dilutes it somewhat, especially as the compositions take several listens to work their magic.�It would be a shame if this stood in the way of such beguiling music getting wide attention outside of the jazz bubble.