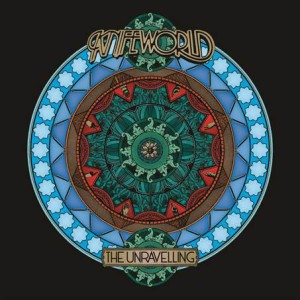 It’s been five years since their last album, Buried Alone: Tales Of Crushing Defeat, but in that time, the lord of Knifeworld, Kavus Torabi, has been very busy indeed. He’s been part of Gong and various other bands, hosted a prog radio show with snooker legend Steve Davis (who is in fact, more interesting than people might have ever suspected) and of course spent his time working on more Knifeworld material.

Since his days with Monsoon Bassoon, Torabi has always been someone who writes dense yet strangely hookladen songs. With Knifeworld things are no different, if anything this album is about as ambitious as anything in Torabi’s long and extensive career to date. The Unravelling is an eight song cycle, is performed as an octet, and is nothing if not grandiose in its intensions. The idea of a song cycle might well sound pretentious, and perhaps it is, but what keeps The Unravelling from unravelling into a unwieldy mess is Torabi’s deft songwriting nous and keen ear for a hook. These songs might well form a cycle, but they are all quite capable of operating independently too.

Opening track I Can Teach You How To Lose A Fight starts in muted fashion with delicate keyboards and strummed acoustic guitars complimenting Mel Woods’ beautiful but understated vocals. The whirring of clock parts and machinery in the background give a wonky Victorian feel, but also suggest that the cogs that drive the album are slowly clunking into life. Before long the full band has launched into a freakish prog-hymn, like a kind of feral Rick Wakeman freakout. “Why’d you grow those teeth in your heart?” asks Torabi sounding as if his has been chewed up and spat out by an evil Queen. It’s essentially the dialogue of a relationship winding down, but with its winding musical motifs, joyful honking sax parts mixing with solemn vocals and dramatic guitar stabs, the introduction to the album feels like a kind of synopsis of what’s to follow or an overture of sorts. There’s joy, threat, love, anger, fun and a fair bit of magic too.

Send Him Seaworthy starts life as a kind of lurching boy’s own adventure, with nautical themes and a sense of wonder seeping into the orchestration, but come the telling conclusion it becomes tale of paranoid love. Don’t Land On Me meanwhile meanders along in a faintly jazzy way until a sharp stabbing rock riff cuts across its bows. Suddenly, it becomes a curious mix of swing, The Osmonds‘ Crazy Horses and Kenny Rogers‘ version of Condition. The Skulls We Buried Have Regrown Their Eyes meanwhile is a woozy old-school nursery rhyme that contains a requisite amount of grotesque imagery.

Destroy The World We Love is the pop nugget around which the album truly revolves. It possesses a laid back lollop, a very deliberate hook with the line “secret in your hands” digging deep into the ears early on, but it quickly reveals itself to be an expansive and exquisite journey. Fans of Genesis (and naturally Cardiacs) will find plenty to appreciate here but as usual Knifeworld stop short of being self-indulgent and ensure that the song never disappears up its own firmament.

If The Skulls We Buried hinted at something a little unsettling, then This Empty Room Was Once Alive confirms that there is something genuinely creepy lurking under the surface of this album and it just so happens to be in the form of a Victorian ghost story. Fortunately I’m Hiding Behind My Eyes quickly takes over and steers back towards folk inflected prog before things get to terrifying. Once again, the Octet are in fine form creating a bucolic world for the band to inhabit and explore.

The key to this album is in its title. It is well written, and beautifully performed, but in order to get the most out of it, a certain amount of unravelling needs to be done. The five year wait has been worthwhile, and Torabi’s Knifeworld seems ready to begin creating its own universe. As strange and creepy as it seems at first, it is fun to spend time exploring.