Kodaline – Coming Up For Air 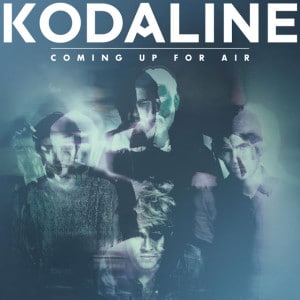 Coldplay. It’s impossible to listen to Dublin quartet Kodaline without recalling Chris Martin and co. so best get it out the way immediately. Debut album In A Perfect World from 2013 introduced the highly photogenic boys as a chart-topping, ready made, highly polished act with a severe ‘young Coldplay’ likeness, guaranteed to charm impressionable female admirers from London to Timbuktu.

But it came with an edge, and not the U2 guitarist occasionally recalled for some of the guitaring parts on offer. An edge of something better, something raw and intriguing, an underlying folky twang that transformed them from just a copycat act into something a little different, with a Mumford And Sons vein in fact.

Steve Harris was the producer for the first album and he returns, in part, for the follow-up. Rather tellingly, though, it’s the appearance of another ‘co-producer’ Garret ‘Jacknife’ Lee (U2, Snow Patrol et al) that defines a slightly new direction for the band. The polished edge is still there, but unsurprisingly it’s now been Mr Sheen’d to the point where commercial benefit is being wrung from every quarter, and in places the lyrics penned by singer Steve Garrigan approach Cheese City in head-on fashion.

Opening track and single Honest epitomises this side of the album; it’s a bouncy, upbeat effort but the target audience is, intentionally or not, immature, over-dramatic love-torn teenagers. “If you lie to me again, I’ll be the one that walks away”, warns Garrigan in a sickly sweet declaration. Same goes for The One, it’s fingers down throat lyricism of the highest order: “I knew, the first day that I met you, I was never gonna let you, let you slip away”. Pass me a bucket boys, please! Trouble is, as vomit inducing as the lyrics are, the song will be a hit with the young ladies for sure.

Maroon 5 are another band recalled at times, for example on Human Again but it bores with its reedy, synthesised guitar-line permeating throughout the formulaic effort. In fact, the band spend the whole album veering between Coldplay and boybands, sitting somewhere near The Script as a result. The slower Unclear walks such a path, capitalising on the inclusion of a child choir to emphasise the songs message about the future whilst Play The Game leans heavily towards Maroon 5 and the chorus (following a great bridge) will win many fans, even if the dreadful synthy guitar riff doesn’t.

An unorthodox splishy-splashy rhythm carries Autopilot forward for a much better effort with a strong, anthemic chorus but the middle section of the album is probably the strongest. Firstly, Coming Alive could indeed be Mr Martin’s band, but it’s infectious, highly uplifting and destined to be a hit single. Ready raises the standard higher, a summery foot-tapper with catchy, if repetitive, chorus – a pop-tastic delight that’s another dead cert for success that this time benefits from a perfectly placed synth instrumental passage. Better then captures that early, acoustic sound – albeit fleetingly – for a powerful ballad that represents a lighters-in-the-air moment but it’s the excellent Lost that may silence the cynics. It’s an atmospherically-charged cut with an exceptional chorus that for once escapes the pre-set boundaries, sounding like boys trying to break free from the polished, market-targeting pop perfection and reach out to Muse territory.

Similarities with other acts are everywhere and that ultimately leaves Kodaline struggling to form their own identity. There are numerous highlights on Coming Up For Air to ensure success in sales and chart placings and that is, of course, the dream for any aspiring act: fame and fortune. But it comes at a cost as the charm and character of their early guise is being tempered, and that is possibly something the band will look back on in time before turning their backs on commercialism and rediscovering their true identity. When that day comes, Kodaline could yet rule the world.