Kodaline – One Day At A Time 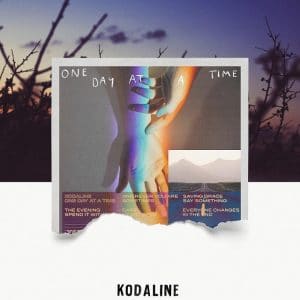 Encapsulated in a – mostly – sonically cohesive 10 track burst of nostalgia, Kodaline’s One Day At A Time is the dreamy summer you first fell in love. Whilst Politics Of Living, Kodaline’s 2018 release, was productionally collaborative, the process for One Day At A Time was comparatively stripped back: the band created this album in their modest recording space in Dublin, with bassist John Boland leading the production. This simpler process – taking it One Day At A Time – allows the album to highlight what Kodaline does best: emotive lyrics, strong hooks and beautiful harmonies.

The Evening in particular shines on this album – fans of All I Want will want its grown up, somewhat-grungier cousin on repeat. Melodically indie pop, with tragically nostalgic lyrics, Garrigan’s vocals, especially the almost-growls of the final choruses, betray a more volatile, outspoken Kodaline than seen from the promotional singles. In short, it suits them. This track grows from strength to strength, melodically ebullient and melancholy at the same time, then cuts abruptly for the final lyrics: “I wish you could be here.” Easily situated in every person’s heartbreak playlist for 2am, or on a mind-cleansing car ride in the rain, bittersweet The Evening is masterful.

Sometimes, the second single already released, could easily be called trite, with an upbeat folk track reminiscent of a slower-paced Hey Soul Sister, and lyrics like “I just hope these words will help whoever’s listening, if someone cares to listen in”. Yet the jubilant beat combined with the catchy chorus makes it endlessly listenable, whilst still dealing with difficult topics like anxiety and not feeling enough. It’s an earworm, and a powerful match with Wherever You Are for the most joyful track on the album.

Say Something tries to emulate Saving Grace, the third single of the album, in its minimalist acoustics as it crescendos to a meaningful chorus, though it slightly misses the mark and fails to have the same poignancy. It might be due in part to the ballad power that the verses suggest but the chorus just doesn’t deliver. It is saying something though when the weakest track on this album is still subtly delightful.

Spend It With You is the standout. Easily at home in a black-and-white Parisian romance montage, and a sure-fire future hit with waltzing newlyweds on the dancefloor, it oozes ethereal emotion. Although a fictitious story of a couple who vow to stay together during an apocalypse, it is the most real-sounding song on the album. This could certainly be in part down to 2020’s adamant need to keep adding more apocalyptic storylines to our newsstands, which make the lyrics doubly as heartfelt, but the gorgeous craftsmanship of the track itself also can’t be ignored. It is a timeless piece that speaks to Kodaline’s roots whilst transcending anything they’ve done before. It will make you want to be in love, or perhaps at least think about a post-quarantine date, and the trumpet pointedly demands its own excellent review.

Everyone Changes, Spend It With You’s heartbroken, older sister, is as emotionally rich and deftly produced. Unashamedly nostalgic, it hits all the right notes and fits in with the album’s more lyrically revealing tracks, like heart-wrenching finale The End and the troubled Care. One Day At A Time is an album from a band who have travelled the world, experimented expansively over genre and production, and come back home again. Kodaline don’t stay safe by sticking to their roots here – rather they have created a raw, emotionally driven body of work that seems effortless and cleverly crafted all at once. It’s a cathartic breath of fresh air.