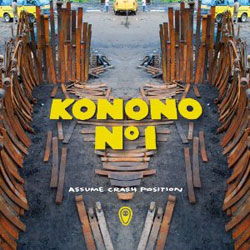 Konono No 1 seem to inhabit a world apart from modern music aesthetics, instead sounding as if they’ve been sweating it out in the streets and banging on pilfered junkyard scraps for decades. Their music is genuine and infectious in its exuberant hustle. On their second full-length album Assume Crash Position they’ve rounded out their scrapheap sound with Western-leaning instrumentation.

Hailing from the Democratic Republic of Congo, Konono No 1 – full name is L’orchestre Folklorique Tout Puissant Konono N� 1 de Mingiedi – may have begun working together in some form as early as the ’60s, goes the myth. More likely it was 1978 when Mawangu Mingiedi, a likemb� (thumb piano) player, formed a rag-tag group of street musicians. Since, the group has evolved, electrifying their sound with magnets salvaged from car stereos and loudspeakers like gramophone horns.

Their first album, 2004’s Congotronics, was released to frenzied acclaim in lo-fi electronica circles, and the group has since gone on to tour North America and Europe, collaborate with Herbie Hancock on his forthcoming Imagine Project record, and they’ve been selected by Matt Groening to perform at his ATP festival weekend. Their sound is certainly tribal, but to label it as such is to miss something over-arching in their postmodern global construct.

The electrified likemb� produces the album’s foundation, blaring through Vincent Kenis’s production with largely unchecked levels of distortion that could only be created by the genuinely busted-up nature of homemade speakers. But around this centrepiece, Konono No 1 bleeds to the edges, generating pulsating percussion circles (the term polyrhythmic doesn’t even begin to describe it; take note, Vampire Weekend), call-and-response group vocals, and bass and guitar work provided by members of Congo compatriots Kasai Allstars.

While the bulk of Western culture may not really understand African music – especially when it’s played with such visceral unabashed abandon as this – it’s not difficult for the uninitiated to appreciate the sheer physicality that must go into producing the sounds just about contained within Assume Crash Position. And the production is something of a masterpiece; one can nearly feel the heat pulsating from the pavement, and trace the path of the sun across the concave surface of the African sky.

The album’s tracks are extended experiments in group dynamics, each allowing every aspect to swell and build on its own and in synergistic cooperation with its counterparts. Male and female vocals intermingle and switch focal points; percussion circles in on itself and builds, stopping with eye-line precision and re-spinning without notice; guitar and bass lend a Graceland familiarity to the album’s most free-form moments; and at the centre, Mingiedi’s likemb� buzzes and flits restlessly.

Assume Crash Position is certainly not an album for every taste, but the adventurous musical globetrotter will find its rhythm infectious. Yet the real stroke of genius is in Konono No 1’s ability to transcend the junkyard, melding scraps and discarded electronics into a fitting soundtrack to the hustle of this, our global village.

Konono No 1 on Spotify