Kontakte – We Move Through Negative Spaces 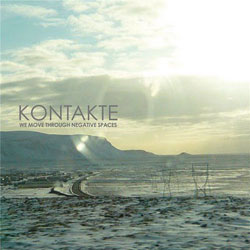 After first appearing on the musical landscape in the early 1990s the genre of post-rock has embarked on something of an interesting journey, initially driving itself down something of a narrow, stifling alley. However, recent years have seen the genre expand and develop, often incorporating elements of electronic and ambient music, and increasingly being supplemented by string arrangements. Such is the relative wealth of music being made in this category, that in order to achieve distinction bands are increasingly required to produce strikingly new or original compositions.

London based outfit Kontakte are faced with this kind of challenge on the release of their second album We Move Through Negative Spaces. It reflects the trend towards electronic/ambient/modern classical music whilst ensuring that their focus never strays too far away from a resounding guitar sound. The album has a lot in common with other contemporary instrumental music in that it aims at cinematicism, and it ultimately enjoys a degree of success.

The two most obvious points of reference are Mogwai and Explosions In The Sky. The quiet-to-loud dynamics practised by these bands are not as evident here however, the changes being more gradual.

Opening track Astralagus sees an alluring guitar line relayed over escalating synth passages and fractured electronic beats. Hope… showcases pretty melodies played out against a backdrop of enkindled guitars and With Glowing Hearts offers similar, delicate refrains emerging from a resounding wall of static sound. These are templates which are replicated effectively over the course of the album.

The elegant, muted atmospherics of Early Evening Bleeds Into Night features the first use of strings, followed soon after by A Snowflake In Her Hand which employs them in a more calming, elegiac fashion. It positions the band closer to artists such as Jóhann Jóhannsson and Eluvium. The Owls Won’t See Us In Here sees the return of ricocheting, splintered beats to the sound mix. The Ocean Between You And Me ends the album in contemplative style with a substantial yet restrained crescendo.

As with Explosions In The Sky in particular, the titles of each instrumental track seem to try to place the music in a human, emotional context, and inject some warmth into the instrumentation. In We Move Through Negative Spaces Kontakte have released a perfectly accomplished, assured album, albeit one that never really threatens to move the genre into uncharted territory.

More on Kontakte
Kontakte – We Move Through Negative Spaces