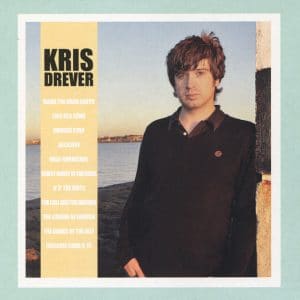 Beloved of folk fans everywhere, Scottish singer-songwriter Kris Drever has always appealed to both traditionalists and the new wave of contemporary folkies. The release of his second solo album is a major talking point in folk circles, with his 2006 debut Black Water being heralded as one of the finest releases of the new millennium.

Drever is perhaps better known outside folk circles for his work with the delightfully eclectic Lau. Following on from their wonderful Arc Light, Drever returns to a more traditional sound light on frills or fripperies on Mark The Hard Earth.

Featuring largely the same cast list of players that graced his debut, notably guitarist Ian Carr, keyboardist Donald Shaw, drummer Roy Dodds and bass player Ewen Vernal, Drever has also recruited multi-instrumentalist Tim O’Brien to his backing band. It is an important addition, with O’Brien’s mandolin, banjo and ukulele colouring in some of the wide open spaces that are a feature of Drever’s solo work.

Producer and fiddler John McCusker also returns to lend his prodigious talents to the project. McCusker is all about the tiny details, which makes Mark The Hard Earth the kind of album that grows on the listener with repeated plays. The album repeats the formula of Black Water by mixing old and new writing, with Scottish songwriter Sandy Wright prominent among the latter. His Steel And Stone (Black Water) had lit up the debut album, and here he contributes two lovely folk waltzes, Shining Star and Wild Hurricane.

Wright is outshone in the songwriting stakes by Drever himself (making a rare writing incursion with the stark title track) and his brother Duncan Drever. Duncan’s lilting The Crown Of London is one of the album’s few upbeat numbers, and benefits from some brilliant playing by Carr.

Boo Hewerdine also makes another guest writing appearance, following his Harvest Gypsies with the bluesy sing along Sweet Honey In The Rock. It’s a simple, charming piece that confirms the suspicion that Hewerdine is one of this country’s most unsung songwriting talents.

Two tracks really stand out on Mark The Hard Earth and this ironically makes it a harder album to love than the debut, which had a consistency of tone and purpose that was compelling. The traditional Banks Of The Nile is given a duet treatment, with Drever and Heidi Talbot breathing new life into a hoary old chestnut.

The obscure Allegory, originally written by Murray Attaway, is a spellbinding piece that backs up the cryptic lyrics with a musical arrangement that oozes tension. It is a natural match for Drever’s singing voice, whose warm brogue has always carried a barely disguised hint of menace.

Mark The Hard Earth is a solid enough album but perhaps not the masterpiece that Drever fans were expecting. The man seems incapable of recording a duff track, but there are just a few moments on this album where he seems to take the easy route. Here’s hoping that, on his next album, Drever heads for the road less traveled.