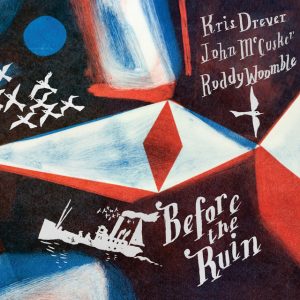 Before The Ruin should be subtitled ‘or what happened when Scottish folk musicians Kris Drever and John McCusker got together with Idlewild frontman Roddy Woomble‘. Not very snappy, granted, but otherwise there is a danger that this beautiful album will be overlooked.

Idlewild is currently without a record deal and Woomble has been using the down time to indulge his passion for folk music. His 2006 solo debut My Secret Is My Silence was produced by McCusker, the fiddle virtuoso who has released several acclaimed albums of his own. Drever, a member of the excellent trio Lau, received plenty of critical kudos for his 2006 debut Black Water, which was also produced by McCusker. The trio is joined on the album by a select group of musicians drawn from the folk and rock worlds, including Norman Blake (Teenage Fanclub), Philip Selway (Radiohead), and Donald Shaw (Capercaillie).

On this essentially straightforward folk album it is Woomble’s voice and songwriting that take centre stage, which is hardly surprising as the project originally began life as his second solo album. What is a delight is the way Woomble’s vocals adapt so easily to the folk idiom, lending a conversational immediacy to his introspective songwriting.

Woomble made frequent references to the sea on My Secret Is My Silence and water is a dominant metaphor on Before The Ruin, with the main theme the physical and metaphorical pull of the ocean (the album cover, painted by Orcadian painter Charles Shearer, provides an appropriate visual representation). This theme provides the driving force for the album’s best tracks, Into The Blue, Moments Last Forever, and Rest On The Rock, three sublime compositions that deserve to be garlanded with awards and become standards.

McCusker’s arranging and production talents should not go unmentioned, as he provides delicate instrumental touches throughout that perfectly complement the basic acoustic set up. Drever’s expressive voice, a more traditional folk instrument than Woomble’s, is also used to good effect on the album. Whether harmonising, trading verses with Woomble on All Along The Way and Rest On The Rock, or taking the lead on The Poorest Company, he imbues the songs with an earthy reality.

Woomble’s fans followed him when he put Idlewild on hold to record My Secret Is My Silence. Despite being largely acoustic that album retained recognisable rock elements that are absent from Before The Ruin. It will be their loss if they do not buy this album for Woomble is making the best music of his career. Hopefully, Before The Ruin will also lead several rock fans to investigate the solo work of Drever and McCusker. Talent this good should not be pigeon-holed.