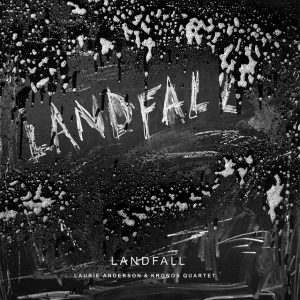 Landfall sees the esteemed Kronos Quartet return to relatively familiar ground after last year’s album with Malian outfit Trio Da Kali (although given their wide-ranging music and collaborations it could be debated what exactly constitutes familiar ground for them). On this occasion they work with Laurie Anderson on an album that addresses the subject of Hurricane Sandy and specifically the devastation it caused to New York and Anderson’s apartment back in 2012.

It sees them return to their progressive, forward-thinking best combining the purity and integrity of their strings with various electronic elements and new technology. The subject matter naturally results in a piece of work that at times is bleak, troubling and frantic, yet Anderson’s spoken word contributions prevent it from falling too deeply into the abyss.

She watches the hurricane, “a huge swirl that looked like the galaxies”, destroy her possessions, an experience she theatrically describes as “beautiful, magic, catastrophic”. Elsewhere she strikes a more surreal note, imparting interludes on the meaning of dreams and the extinction of animals that impressively expand the narrative while also breaking up the surrounding thematic weight.

Musically it ranges from coruscating to eerie, from ominous to plangent and sees the quartet operating at the height of their powers. It’s a hard-hitting, ambitious album that only serves to further consolidate the reputations of all involved.