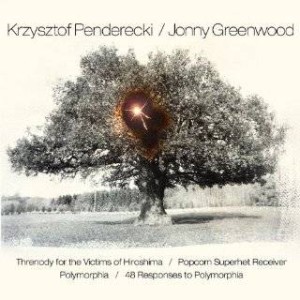 Listen to many a modern film soundtrack and you will hear the influence of Krzysztof Penderecki. Those moments in a tense part of the picture where the strings cluster together and you feel as if the bottom has dropped out of your stomach? They are almost certainly borne of the composer, or owe something to his influence.

This imaginative Nonesuch disc recognises that influence, and celebrates the mutual respect Penderecki and Radiohead guitarist Jonny Greenwood have developed for each other. It begins with the Polish composer’s defining work, the Threnody For The Victims of Hiroshima, followed by Greenwood’s accomplished and well received Popcorn Superhet Receiver. Then the mutual respect is examined in a ‘call and response’, with the Polish composer’s Polymorphia followed by Greenwood’s 48 Responses to Polymorphia. All four pieces are for string orchestra, but use the forces with great imagination.

Of the four pieces here by far the most established is Penderecki’s Threnody To The Victims of Hiroshima. It is a sobering thought that this work is now over 50 years old, and in that time it has spawned a swathe of imitations. Yet the horror of what he was writing about was incredibly real – no film subject here – and that is immediately evident in this performance from the AUKSO Chamber Orchestra, which sends a chill down the spine with its first, crisply struck cluster of notes. Concentrated throughout, this is music of raw emotion and power, performed with impressive ensemble and virtuosity.

Because of this Popcorn Superhet Receiver has a lot to live up to, but Greenwood has already proved his aptitude with string orchestra forces. This is a more obviously rhythmic work, and the persuasive lilt to the rhythm in Part 2B suggests the influence of a more exotic culture – Caribbean perhaps. The moments of pure tonality in this piece are more obvious, but its tight structure works well in another impressively cogent performance.

Thoughts of the horror film surface again when Polymorphia starts, with a sense of real dread in the subterranean double bass lines, like a deadly vehicle grinding its way into action. Penderecki is a master of sound effects with these forces, and the sounds five minutes in are akin to cracking branches, as if a veritable forest is coming to life, the stringed instruments suddenly reduced to their raw materials. To compound the feeling of unease the sighing voices two minutes later sound from afar, as if from the underworld, before the unexpectedly striking purity of C major takes hold to the end.

This is immediately picked up by Greenwood in his Responses…, answering as if a sacred chant has been laid down. He builds on this theme of tonal purity, which proves extremely moving when the chant music reappears in the section entitled Overhang, but which is overdone at times elsewhere. Structurally this is a more difficult piece to grasp, and more derivative in its use of sound effects.

The four pieces here make an album that carries a powerful impact, as well as recognising the obvious talents of both composers in writing for the string orchestra. The down side of this is that because of the performing forces the textures stay relatively similar the whole way through, and listening to all four pieces at once is not the best way to experience the album as a whole.

However the performances are excellent – and it is good to see Penderecki welcomed back from what could be described as the fringes of contemporary music. His music is very much alive – and Jonny Greenwood’s next moves in this area will be awaited with great interest too.