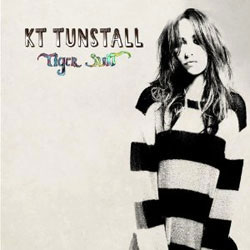 Few artists are candid enough to name an album after a recurring dream they’ve had since childhood, but for KT Tunstall the title of her third offering could be a double entendre. It refers primarily to her whimsical meanderings as a child, stroking a tiger who reappeared in her dreams at the back of her garden, an act of bravery she concludes to only be possible if wearing a tiger suit.

Those who have followed the Ivor Novello Award winning songstress’ career spanning the last six years might also derive a second meaning as being symbolic of a new found bravery in her work, for this album depicts a Tunstall transformed.

Despite enjoying repeat success in the release of her first album Eye To The Telescope, followed by the platinum award winning Drastic Fantastic, Tunstall confesses to having undergone a journey of soul searching to produce her third. Told she cares too much for what everyone else thinks by US singer-songwriter and lead singer of the 4 Non Blondes Linda Perry, Tunstall embarked on a three month sabbatical with her hubby and returned refreshed and ready to push her musical boundaries. Tiger Suit is the result; a collection the artist herself has described as Eddie Cochrane meets Leftfield and one that’s been labelled “Nature Techno”.

The opening track Uummannaq is aptly named after a small town in Greenland where Tunstall performed and features the poignant lyrics: “Did you see it, that I needed to prove that my stinger always stays, you said she’s beautiful when she plays, did I hit you in the proper place?” It’s a catchy and confident track with a modern tribal call in which Tunstall’s vocals prevails above all else.

Glamour Puss in contrast is a safe pop grower bursting at the seams with attitude and an addictive bassline that sees Tunstall have her first stab at introducing electronics, giving it dance floor potential. But if you’re still unconvinced of her ability to combine acoustic folk with synths, Difficulty and Lost should cause you to embrace her new sound. None of this comes at the price of her vocals, which once again see her demonstrating a remarkable vocal range.

The pre-released single (Still A) Weirdo is a light playful track which prompts comparisons with the likes of Feist, Allie Moss and electronica/folk favourites Peter Bjorn And John. As infectious as it is original, this is easily the standout track of the album and exemplifies best the Brit Award winner’s ability to marry disparate styles as well as her desire to experiment with her sound, aided and abetted by a revised band and Arctic Monkeys producer Jim Abbiss.

Despite her self-confessed lack of confidence when it comes to crossing musical boundaries, Tunstall proves that in the guise of her Tiger Suit she can achieve anything she puts her mind to. For her at least, 2010 is the year of the Tiger.