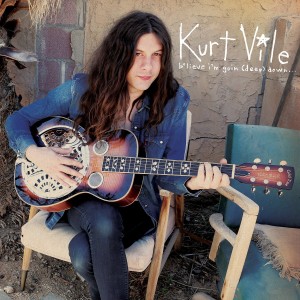 Released in 2013, Kurt Vile & The Violators’ album Wakin On A Pretty Daze drew considerable critical acclaim from all quarters. The collection marked a change of direction for Vile, with warped electric guitar soloing coming to the forefront as he continued his journey after earlier comparisons to Woody Guthrie, Bob Seger and Nick Drake. 2011’s Smoke Ring For My Halo was the first album to threaten a breakthrough, an album where Vile felt he significantly matured as an artist, but Wakin On A Pretty Daze took his career one huge step further.

Perhaps the biggest fan-catcher on offer was the brilliant, meandering (almost) title track, Wakin On A Pretty Day, a phenomenal 10-minute epic that boasted some electric guitar noodling that would have been more expected of his ex-The War On Drugs colleague Adam Granduciel. Other big draws were the psychedelic haze of Girl Called Alex and the instant appeal of the more commercial, radio friendly cut Air Bud. But, rather surprisingly, sixth album b’lieve I’m goin down… is a different beast entirely, with the electric guitar becoming little more than a support act for Vile’s increasingly nonchalant songwriting and lyricism where songs are crafted carefully around simple, repetitive catalysts. “I wanted to get back into the habit of writing a sad song on my couch,” he states, and, as impossible as it may seem to die-hard fans, the laid back vibes already synonymous with the majority of his material this time become even more relaxed, almost horizontal in fact.

Impressive single Pretty Pimpin opens the new collection, sounding a little like Southern rock emanating from the likes of Lynyrd Skynyrd, the song built around a constant acoustic riff that’s not a million miles away from Sweet Home Alabama. “I woke up this morning, didn’t recognise the boy in the mirror”, sings Vile as he appears to undergo somewhat of an identity crisis. I’m An Outlaw is another huge highlight, this time some excellent banjo playing contrasting subtle electric guitar touches and a drum machine to perfection. In fact, the first half of the album is overloaded with brilliance: Dust Bunnies takes a repetitive, addictive guitar riff and weaves a compelling vocal melody around it to great effect. Finger-picking majesty then adorns the reflective, brutal scoff at life that is That’s Life, tho (almost hate to say), a number that demands your utmost attention to the words on offer whilst Life Like This finds existence in the shape of a repetitive piano riff, flecks of electric guitar and occasional, well-placed electronic swathes.

The acoustic finger-picking of All In A Daze Work and Stand Inside are a couple of more recognisable Nick Drake-like efforts, the second also utilising simple piano playing, but perhaps album closer Wild Imagination is the most mesmerising song in this whole, thoroughly rewarding collection. Basic percussion and some excellent acoustic guitaring form the basis of the six-minute blissed out number, the kind of song that you want to take out on to the front porch of your country ranch to enjoy whilst rocking on your swing-seat with a cold beer in the evening sunshine. Not that many of us have a front porch with a swing-seat of course, let alone a Dallas-style country ranch.

b’lieve I’m goin down… won’t win a legion of new fans in the same way that Wakin On A Pretty Daze managed two years ago, the instant appeal being far less than its predecessor. But while 2013’s effort saw some incredible peaks, Vile’s new album has managed to forge a more consistent collection of songs built around simplicity and a shrugged shoulder approach to lyrics. It’s a collection that will slowly worm its way inside to provide in many ways a superior experience, albeit one that reveals itself more gradually to those that look earnestly beyond the surface.