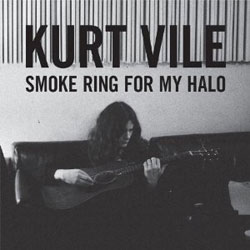 With a name like Kurt Vile, you’d half expect the Philadelphia born artist to be the kind of guy who just literally out of nowhere would just yell “SLAYER! You know…Urrrgh. Go an’…Ahh”. However, despite having a name which is half Cobain and half – well – vile, Smoke Ring For My Halo is an album which is predominantly voice, acoustic guitar and a hell of a lot of reverb. Not a Metal Zone pedal in sight then? Nevermind.

This is Vile’s fourth studio release and his second on the illustrious Matador label. Despite Vile’s career still being in its relative infancy, he has somehow found himself measured up to all manner of artists including Tom Petty, Leonard Cohen and Animal Collective. With such an assorted set of musical comparisons it’s fairly disappointing to find that Smoke Ring For My Halo is an album of such little variety that it lacks any distinct immediacy.

Chiming guitars meander through repetitive chords and melodies whilst Vile’s nonchalant vocal style is dispassionate and – where it fits the slacker nature of individual songs – it struggles to make the album as a whole anything more than an average listen. Had the production been a little more adventurous and the songs a little less rambling, this album could have been a great one.

Belly’s Arms and Jesus Fever begin the album promisingly enough, with upbeat guitar playing and catchy vocals providing memorable melodies. But from then on the album becomes disinterested and slightly hit and miss. Puppet To The Man includes some impressively modest guitar hooks, which fit the tone of the song perfectly, but if you find yourself getting bored with the repetition of the vocals at this early point, the rest of the album may prove a struggle.

On Tour is purposely dour, with only a slight lift in mood with the middle-eight. But when the song returns to the original melody it’s more dejected than consoling. Society Is My Friend is more upbeat and verges on classic rock status in terms of rhythm and melody, yet remaining admirably lo-fi to the hilt. On tracks such as Runners Up and Peeping Tomboy, Vile’s lackadaisical vocal delivery becomes tiresome; it’s clear that the album needs an injection of energy as the lazybones aesthetic begins to wear thin.

Kurt Vile obviously has the talent; his previous work proves that. Where past albums touched upon all manners of influences and genres, Smoke Ring For My Halo seems content to plant its flag into barren soil. Vile’s vocals are stylistically apathetic to fit the stoner, slacker vibe; it’s unfortunate that – in this case – what has previously made Kurt Vile idiosyncratic here detracts. A swing and a miss.