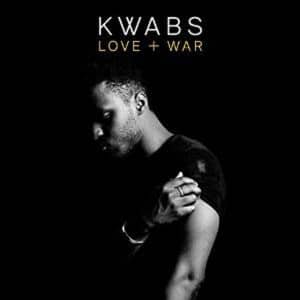 Walk – the calling-card single by R&B singer Kwabs – has been a huge hit across mainland Europe, hitting Number 1 in Germany and garnering over 200 million streams. In his native UK, however, Walk stalled at Number 45 back in September 2014. Yet Kwabs (whose full name is Kwabena Sarkodee Adjepong) is currently enjoying enviable career momentum. At the start of the year, the 24-year-old south Londoner was included on the BBC’s highly coveted – if not always reliable – Sound Of 2015 longlist; he’s set to appear on Disclosure’s forthcoming second album; and a show at London’s 3,000-capacity Roundhouse is slated for October.

Kwabs’ appeal is easy to understand. He’s blessed with a rich baritone that can’t help but sound melancholic, even when he’s singing about ostensibly happy feelings and occurrences. Love + War’s 12 tracks are a pleasing mixture of simple, accessible melodies and complex, contemporary-sounding production (the latter courtesy of Lana Del Rey collaborator SOHN and The Invisible’s Dave Okumu). This mixture of the old-fashioned and the modern is likely to appeal to a broad age range and, crucially, mainstream radio playlisters.

Walk is actually one of the weaker tracks on Love + War. Its see-sawing melody is certainly catchy, but it’s also grating after a couple of listens, less a deserving hit single than perfect interstitial music for a video game. (Which is exactly what it is, having featured in the latest incarnation of the FIFA series of games.)  Elsewhere, My Own wastes a promising gamelan-style intro on a melody that follows the path of least resistance to boring, forgettable results, while Make You Mine is duller still: an upbeat number that resembles an M People album track. Forgiven, meanwhile, is a portentous ballad that threatens to collapse under the weight of its self-seriousness.

Fortunately these tracks are outnumbered by darker, stranger cuts whose fidgety arrangements prove the perfect foil for Kwabs’ velvety vocals. The opening title track, with its hammering keyboards and backing vocals that sound like a haunted gospel choir, is thrillingly urgent. Fight For Love melds the weird, disembodied voices of its eerie verses to an uplifting, house-y chorus, while Perfect Ruin, Father Figure and Cheating On Me are comparatively minimalist ballads that give Kwabs’ voice all the space it needs to melt hearts.

Love + War’s release comes some three years since he first released his debut EP – an admirable display of patience on the part of his record label. More patience may be required: Love + War is solid rather than spectacular, but contains enough promising signs to suggest his next album could be something special.