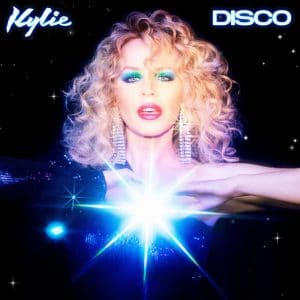 Kylie Minogue‘s voracity for reinvention is up there with the cultural chameleon that is Madonna. She has gone from antagonistic mechanic to frothy pop Skipper doll, transmogrifying into fully-fledged dancefloor doyenne, ricocheting around credible dalliances with indie music and a duet with Nick Cave, and culminating in an admirable Glastonbury Legends set. Her last album Golden, a rather personal affair, was yet another sonic departure, seeing her two-stepping into the charts.

Minogue has packed her dazzling country costumes back into her trunk and brought out shimmering and sleek disco outfits for her new album, pitched as a trip to the galactic disco. This blueprint of optimistic disco licks is precisely what the world needs right now. Dancefloors may be dark and bereft, yet Kylie beckons us to don some sparkly costumes and dance while nobody is watching.

And if it’s one thing she excels at it’s campy shimmer. Her 15th album, replete with retro perm and glitzy make-up in the artwork making her appear like a human glitterball, does not disappoint. The first cut from the album appeared in late July; Say Something resonated deeply in this pandemic-afflicted time with its opening lyrics “We’re a million miles apart in a thousand ways.” In the video, Minogue appeared on horseback in a dress inspired by a Halston that Marisa Berenson had worn in Studio 54. It appeared that she was here to save us from the dark with this intergalactic disco synth slap.

The album opens with Magic, starting off like a strange fusion of Jinny‘s Keep Warm and Robbie Williams‘ Feel. This song has promises of future hope and weaves into a funky disco bop with horns and handclaps for days. The sensual Miss A Thing is basically a breathy disco version of her own behemoth Can’t Get You Out Of My Head, so much so that you can interpolate the iconic la la las when it suits. The sassy Real Groove is a more funky affair, and one of many tracks that hint at Daft Punk influences. Dance Floor Darling is another, a track so instantly classic Kylie, its divine ’80s synth shimmer provides a delicious backdrop, speeding up into a frenetic guitar driven section, though the distorted vocals are a bit of an over-Cher. Last Chance is basically Ottowan‘s D.I.S.C.O meets Abba‘s Voulez-Vous, and Where Does The DJ Go? is a funkier version of her own Step Back In Time.

There are moments that are perhaps as questionable as the Merlot from her wine range. The over-egged calypso of Monday Blues is a kitschy cut that may have been left off Light Years, and there’s little by way of any distinct edge to some of the tracks. There’s nothing as provoking as some of the disco on Madonna’s epic Confessions On A Dance Floor, or the more recent prolific feel of the powerful God Control. But the brief here is obviously to uplift, and the album’s standout Supernova is a pulsating and futuristic out and out banger with a thumping, goosebumps-inducing middle-eight.

The album closes with Celebrate You, a touching tribute to anyone feeling down and in need of some optimism, its soaring chorus recalling All The Lovers. As the trend with disco appears to be reverberating currently with albums this year from Jessie Ware, Dua Lipa and possibly some metal disco incoming from Miley Cyrus, Minogue more than holds her own here. The sound is largely fresh and pays genuine homage to carefree nights at the disco with gusto, charm and flair, all qualities that Minogue has in spades.