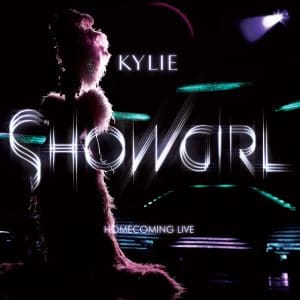 In 2005 Kylie Minogue began her Showgirl tour to complement the Ultimate Kylie compilation. As has been well documented elsewhere, she was then diagnosed with breast cancer and the tour was cut short. On recovering, the Aussie poppet resumed her tour with a slightly revised set list, beginning with dates in Australia before playing in the UK. This, her first live CD, documents the Sydney concert.

As with most live albums, Showgirl Homecoming Live makes the listener wish they’d been at the concert. Knowing Kylie’s levels of theatrical flamboyance on stage, especially with costumes, missing the show’s visual elements feels like only getting half of the story. While glittering and glossy sleeve pictures involving sequins and scantily clad dancer boys suggest some of the glitz, the Sydney gig, unique in this tour, saw Kylie joined by Bono to sing the part originally taken by Robbie Williams. We don’t see what they did; we only hear the U2 front man belt out his lines.

That obvious problem aside, the album plays like a live version of Ultimate Kylie. There are hits from the pop princess’s various incarnations, from a swathe of her late ’80s Stock Aitkein Waterman catalogue headed by I Should Be So Lucky, seamlessly woven into Yazz‘s The Only Way Is Up, to a brand new track due for her next studio album written with Scissor Sisters, White Diamond. This latter piece casts her in the role of disco queen and sounds just different enough from her other material to suggest there’s development yet to happen in Minogue world.

In between there’s space enough of course for a full-on “dance of the cybermen” encore version of Can’t Get You Out Of My Head, and the recent hits Chocolate, Shocked, Spinning Around, In Your Eyes, Come Into My World and a mystic-sounding Confide In Me. But it’s the amount of very early material that surprises – Especially For You fits in to the encore and there’s even space for The Loco-Motion. And if there’s any competition over the crown of Queen of Pop with Madonna, Kylie suggests it’s a figment of someone else’s imagination as she seamlessly mixes Vogue into Burning Up.

It all sounds like a blast, and as a memento of the tour for those who made it along it’d probably deserve an extra star. For those of us who didn’t, it leaves us wishing we had been there to witness the return of a lady fast becoming a National Treasure.