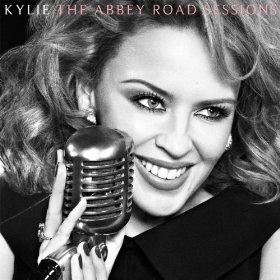 “It’s never too late to change your mind.” So ends the spine-tinglingly delicate take on Never Too Late which closes this curious album, possibly hinting at interesting times ahead for Kylie Minogue. The Abbey Road Sessions marks the climax of #K25, her year-long celebration of the quarter-century since she released her debut single and quickly eclipsed her previous television career as a mechanic on Ramsay Street (Neighbours). The inevitable re-packaging of her greatest hits, The Best Of Kylie Minogue, came and went without much fanfare earlier in the year – this feels like the main event.

The album certainly makes for a more interesting acknowledgement of her unique career. Many pop fans will own the majority of Kylie’s hits several times over, so the concept of re-recording selected career highlights with a full band and/or orchestra is a canny one. It also makes some kind of artistic sense – it’s long been rumoured that Kylie harbours desires to record a jazz album. Indeed, when news of her recording sessions at the legendary Abbey Road studios (which lend their name to this album) surfaced, many assumed that this dream was finally becoming a reality. It wasn’t to be but the languorously vampy version of Slow here certainly suggests that Kylie and jazz could make for great things.

For the most part, however, the album belies the orchestral tag and instead takes its cue from José González‘s 2006 cover of Hand On Your Heart, a reading which Kylie essentially retreads here. The majority of these interpretations follow the now well-worn path of stripping down an uptempo pop song. Sometimes this proves irresistible, as on aforementioned Never Too Late or the opening All The Lovers, where Kylie’s laid-back yet effusive delivery displays a side of her too rarely seen. Simplifying the Gothic drama of Where The Wild Roses Grow is a mistake, however, and a returning Nick Cave is wasted on a less potent copy of the original recording.

The album is most interesting when it is adventurous with its reinventions. On A Night Like This is a confident highlight, transforming the fairly-anonymous Europop of the original into a swaggering big band number which no contestant on The X Factor could pull off. Finer Feelings, meanwhile, comes on with a seductive drama which transforms the song into a lost Bond theme. It’s unfortunate that such bravery did not define the album – at a too-long 16 tracks, it’s difficult to imagine many outside of Kylie’s devoted fanbase finding it all compelling. Having 25 years of pop classics to draw on means there can be no arguing with the quality of the songs here, however, which is enough to ensure that the album could not be a complete failure. This is clearer nowhere than on the jangly Love At First Sight, the euphoric thrill of which shines through despite here rather unfortunately bringing to mind Lighthouse Family.

Yet if the album is a testament to the power of Kylie’s past, it poses curious questions about her future. The solitary ‘new’ song here is a recording of Flower, written during 2007’s X sessions but only previously aired on the X2008 tour. Musically its dreamy piano riff is no great innovation yet its lyrics (apparently about Kylie’s yearning for a child) offer an all-too-rare glimpse into the inner-life of Kylie as an artist in her 40s. As a song which is inescapably Kylie it is (excuse the pun) light years ahead of much of the electro-pop that has made up her albums since Fever conquered the world back in 2001. It teases a creativity last given free rein on the commercial bomb that was Impossible Princess and only sporadically seen since. In stepping outside of her recent comfort zones Kylie sounds so relaxed and liberated that it’s difficult to escape the sense of untapped potential. That final line of Never Too Late, then, offers not only tantalising possibility but also much promise. Here’s to the next 25 years.