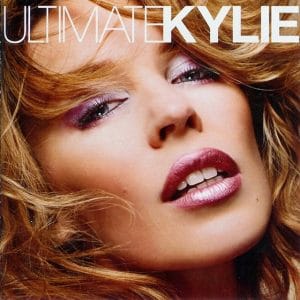 This double disc album is, as its title suggests, the ultimate retrospective of the Australian pop pixie formerly known as Charlene from Neighbours. Containing all her single releases to date, from her years as head girl at the Stock, Aitken and Waterman hit factory through to her current status as undisputed queen of the dancefloor, Ultimate Kylie covers the entirety of Kylie Minogue‘s 16-year pop career, and still manages to find room for the obligatory couple of new tracks.

There’s no getting round the fact that disc one is pretty much pure processed cheese. The Locomotion, Better The Devil You Know – they’re all on here in their tinny, synthy, ever-so-80s glory. What’s most surprising is the speed with which they churned these things out. In just two years (from first number one I Should Be So Lucky in 1988 through to the iffy cover of 1958’s Tears On My Pillow in 1990) Kylie had nine singles in the upper end of the top five, back when that actually meant something. Quality control never seems to have been a priority though: the turgid Je Ne Sais Pas Pourquoi and the God awful duet with Jason Donovan Especially for You stand out as particular low points.

While disc one is likely to appeal only to diehard Kylie worshippers and those in need of an espresso-strong nostalgia fix, the second CD is a different prospect. Her voice has not exactly matured, but it’s become a more polished instrument, and it’s easy to underestimate just how many hits she’s amassed over the years until you hear them grouped together. I never realised that the breezy On A Night Like This was a Kylie track until now, though it’s probably a small mercy I missed out on her cover of Celebration the first time around.

The post SAW wilderness years saw Kylie produce some of her most interesting material. Confide In Me is a sexy, sitar-peppered track that saw her successfully put to bed the girl-next-door image and display the first glimmer of her Madonna-like talent for trend-spotting and reinvention.

Did It Again reminds you of her valiant but wildly misjudged attempt to morph into Indie Kylie circa 1997, only really serving to highlight the limitations of her voice in the process. And hidden away at the end of disc two is probably her most unusual release to date: Where the Wild Roses Grow is a warped, breathy ballad with fellow Australian Nick Cave muttering darkly that “all beauty must die” before dashing her head in with a rock.

There’s nothing quite so dark anywhere else in this collection. Spinning Around and the Cathy Dennis penned Can’t Get You Out Of My Head are hugely catchy tracks and only the most hardened cynic would argue otherwise.

Recent releases Chocolate and Red Blooded Woman have a rather anonymous feel but the new track, I Believe In You, co-written with Scissor Sisters‘ Jake Shears and Babydaddy, provides the sultry disco strut you would expect from such a collaboration. Giving You Up, the second new song, isn’t quite up to the same standards but it won’t do her any harm chart-wise.

Pitched firmly at the pre-Christmas compilation market, this is the definitive Kylie collection and what you make of that really depends on how you feel about the diminutive antipodean. Even the most ardent Kylie fan will probably recognise that the first disc has novelty appeal only, however the second disc contains some of the best examples of slick, easy on the ear post-millennial pop around.