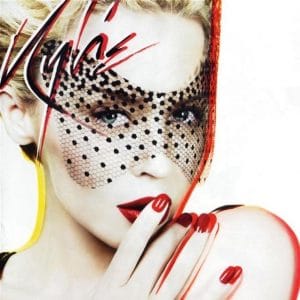 Following her well documented breast cancer scare, Kylie Minogue and her considerable coterie would like the world to know that She Is Back. There’s been a V&A exhibition, a waxwork unveiling, the cinema-released documentary film White Diamond, ITV1’s The Kylie Show, a children’s book, a comeback tour and even a perfume launch to add to her fashion range. Topping it all off like designer frosted icing comes X, Kylie’s tenth album. It’s her first new studio recording in four years. She’s been away, but somehow it doesn’t seem so.

Recorded in London, Stockholm and Ibiza with the requisite extensive gaggle of rent-a-writers and producers seemingly essential to any pop album these days, X’s 13 tracks do what Kylie songs always do – crank up a beat and get energetic around unchallenging lyrics about dancing, sexing and little else. Together they’ve made an expensive-sounding album pitched squarely at Kylie’s existing audience base.

Of the producers arrayed in the sleeve’s near-illegible handwriting font, Greg Kurstin gives best bang for buck. His No More Rain plays like Goldfrapp making a Bond theme in Ibiza while Wow, one of the album’s biggest numbers, borrows an opening from Madonna‘s Holiday and goes on about dancing and sexing, etc. in amongst a breathtakingly impressive whirl of digitisation.

There are nods to the intelligent end of electropop. The One, probably the most memorable track of the album, is New Orderesque with slight tinges of Goldfrapp, yet ultimately fails to lift off. Similarly, the chorus of Stars, one of the few moments when albeit heavily treated guitars are permitted, fires up but despite promise it never quite leaves the launchpad.

Pop itself in general and the songs written for Kylie in particular have traditionally never been about lyrical profundity, so it’s not a surprise that X moves not a jot away from a tried and tested template with chorus lyrics so asinine that a 10-year-old might have penned them. When combined with her robotic delivery these lyrics make the album as a whole difficult to engage with on any level beyond its beats.

That delivery is emphasised on Speakerphone; here someone’s even decided to stick her voice through a Cher-a-like vocoder program, leaving her sounding even less connected to ‘her’ music. It’s just one of several moments on X where it’s difficult to discern any trace of Kylie’s own personality. These songs sound remote and impersonal as a result. Only on closer Cosmic does Kylie begin to sound like a singer interested in her lyrics – and, aside from lead single 2 Hearts, it’s the only song sporting lyrics of any discernible meaning.

2 Hearts itself is hardly a floor filler, erring towards booty shaking rather than foot stomping and, as such, it’s destined never to centrepiece any night on the tiles. Following that, Like A Drug is Mel & Kim‘s Respectable rehashed for a post-Stock Aitkein Waterman audience.

There are also several entirely superfluous tracks. Heart Beat Rock, produced by Calvin Harris, is absolute unmitigated filler. All I See Is You is a soulful ballad ruined by a repetitive metronomic beat that prevents any of the song’s potential expression reaching the listener. Nu Di Ty sounds like it was written for a choreographed arena dance moment featuring the sveltest of Kylie’s collection of scantily clad gays.

Such objections would be mere frippery if anything here was as addictive as Can’t Get You Out Of My Head. Unfortunately there’s little that even approaches that level of songwriting, leaving much of the album to fall back on the admittedly impressive production.

Kylie has long been billed as the pop princess. As she approaches her 40th year still looking half her age, her longevity and popularity are not in question. But while Madonna continues to give the impression of artistic renewal, evolution and reinvention every few years, X suggests Kylie is happy in her niche. Maybe then it doesn’t matter that X is not as fat free as it could and should have been, nor that there’s little obvious passion behind it. X is more filler than killer, but Kylie’s legions of fans will doubtless be pleased at least to see her well enough to be recording at all.