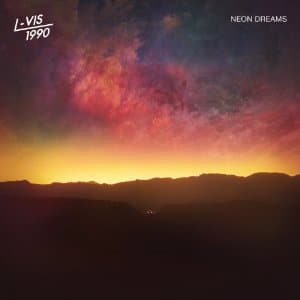 As kudos goes James Connolly hasn’t done too badly. A radio show on Rinse FM with friend and label mate Bok Bok, releases for Mad Decent, parties for Bugged Out and plenty of nodsfor their Night Slugs label and club nights.

His first album as L-Vis 1990 (a title taken from a Sigue Sigue Sputnik song) may surprise those expecting a lesson in bass music and UK funky. Although Connolly can count the likes ofPearson Sound, Ben UFO and Drop The Lime amongst his peers, Neon Dreams breathes a positively modern take on elements of the former, injected with some finely produced doses of house, electronica and synths.

The album begins with a slow spoken word skit before last summer’s feel good single Forever Youkicks the album into life. The Beach’s deep bass groove gravitates under a floaty accompaniment of keys bringing to mind Balearic nights with shades of Laurent Garnier‘s Man With The Red Face. I Feel It’s epic synth rhythms wouldn’t go amiss on a Jean Michel Jarre record except here it gives rise to a constellation of wobbling staccato beats – think Pink Floyd‘s Hey You dropped at a bass night.

The second half of the album noticeably broadens. Glitchy electro, old school house and funky happily stack side by side like a box of records building the anticipation for what’s coming next. The DJ / remixer side of Connolly comes to the fore with the variety of sound and style at this point, like the first half was just the warm up.

Here With You even manages to extract snatches of disco, acid house and bassline and align them in near perfect symmetry, while True Romance’s fuzzy basslines and chitter-chatter samples evoke the feel of a late night club floor. The title track’s slinky grooves and scuzzy effects slip into a starry swirl of synth and keys tying the album to the intro full circle.

Neon Dreams is nothing that hasn’t already been done, but Connolly has had his ear to the ground for the last few years on the party circuit and he wears this experience across the album with no hint ofunease. Moreover, the album’s mood is like a clutch of different nights and sounds pressed into an hour, which is the hallmark of any dance record that betters being simply good. For that L-Vis 1990 certainly deserves the recognition that will no doubt come his way.