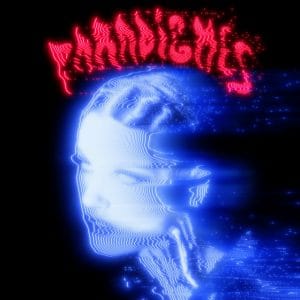 Along with groups like Juniore and L’Imperatrice, the Biarritz based group Le Femme, has, since their 2010 formation, been central to the burgeoning French indie rock and electro pop renaissance. Tracks from their esoteric 2013 debut Psycho Tropical Berlin ended up documenting high end fashion runways and the hippest Netflix shows, whilst their similarly eclectic second album Mystere cemented the bands individualistic attitude to reworking Francophile stereotypes. Their particular journey through sound continues on Paradigmes, a venerably subversive collection of new wave chanson, cathartic ye-ye and simmering punky cabaret, produced by the band themselves and put out on their own Disque Pointu label.

The digitally treated swing of Paradigme opens the immensely pleasurable show, providing a bawdy rhythmic manifesto for would be modern day Josephine Bakers. Fortified by the alchemical voices of principal songwriters Sacha Got and Marlon Magnée, a barrage of trumpets and horns submerse the listener in the bands curiously accomplished and reassuringly fabricated world. The carnival rolls out of town for the maudlin Le Sang De Mon Prochain (My Neighbour’s Blood), a haunting big beat chanson with Got exorcising some whispered emotional demons over quirkily naïve ’80s Eurodisco a la Vanessa Paradis with a dash of Bat For Lashes‘ Natasha Khan.

Cool Colorado comes next, its enchantingly slanderous reverie chugging along, inducing comparisons with Serge Gainsbourg’s inebriated L’Histoire De Melody Nelson as Magnée narrates a humorous tale of getting high, whilst visiting the Rocky Mountains. The diabolically fun Foutre Le Bordel, which depending on who you ask, either translates as ‘to make a mess’, ‘wreak havoc’ or, more crudely ‘fuck it up’ follows, lifting the tune of Stereolab’s revolutionary student anthem French Disko but substituting Laetitia Sadier’s deadpan resonance for a more energetic Plastic Bertrand style tirade, its puerile vibrations thrust the album toward its glittering middle point.

Nouvelle Orleans smears the backwards guitars of Kenny Rodgers and The First Edition‘s trippy classic Just Dropped In (To See What Condition My Condition Is In) with benevolent ice cold coolness and the macho sore rapping on Pasadena, the last of their international stop offs, has the group tongue tied. The frankly bonkers instrumental Lâcher De Chevaux (Release The Horses) features the Lone Ranger unsuccessfully trying to lasso Gershon Kingsley’s cult moog melodrama Popcorn, and the unhinged orgy of banjo on Disconnexion references the lustier bouncier end of ’70s Eurovision as well as the nuanced positivism of Sparks at their prime.

The narration on Foreigner has the same sassy directness and sweary defiance as The Teenagers‘ arrogant Homecoming single. The snarky lyric reaches its zenith with the line “you fucked this guy without a condom, a DJ or whatever, an MC comme ça, oh god I’m moving around, like a foreigner”, a verse so witty once heard, it can’t be forgotten. The band try out Edith Piaf operatic on Force & Respect then Divine Créature gets disoriented on some subterranean dancefloor. On Mon Ami they channel the first Suicide record, and Le Jardin is philosophically verdant.

The exquisitely deranged record draws to an end with Va (Goes) and Tu’ten Lasses (You Get Tired Of it). But you don’t, you can’t. Constantly reexamining their infallible heritage, La Femme have, with the minimum of effort, conceived of an illogical multitude of delights. Paradigmes is an album that, whilst recalling a concession of progenitors, has no modern-day comparison.