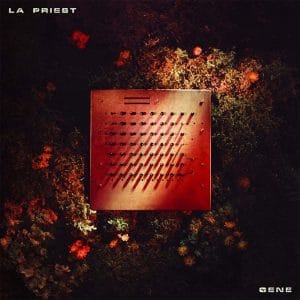 Don’t be fooled by the title. GENE is not a provocative concept album warning against the dangers of tampering with nature – or at least, if it is, then this particular writer has been fooled completely! In fact it is the name of a new drum machine built specially to underpin Sam Eastgate’s second album as LA Priest.

Wherever his musical ventures have taken him, the former Late Of The Pier singer has always impressed with his ability to mould music from a variety of sources, a restless quest which gave Inji, his first album under the LA Priest moniker, an exploratory and enchanting air. For the follow-up, he spent two years in isolation perfecting his sound with GENE, and while he was looking for a more natural approach to drum programming, this suggests the approach of a perfectionist.

There is something comforting in the thought that an artist can spend more time on a follow-up than a record company might normally allow, but it is that having spent so much time indoors, Eastgate will have had to stay at home in the pandemic too, discouraged or even forbidden from going outside.

When the opportunity arises, these songs will work well in the live environment, for while the productions are carefully crafted, there is room for the vocals to be instinctive and meaningful. The drums are the first thing we hear, however, as the soulfully tinged Beginning sets out its stall, Eastgate’s layered vocals working well.

The dappled textures of Open My Eyes are bewitching, the song itself a confidential aside that builds into a circular chorus. As with much of the album the voice is quite heavily treated, coming at the listener from several points in the stereo picture, but the song leaves a woozy afterglow. By contrast Black Smoke is deeply introspective, with a fluid percussion backdrop to a half-whispered vocal that confesses, ‘I don’t wanna wait in fear’.

What Do You See makes the strongest impression, a highly strung vocal from Dirty Projectors’ David Longstreth complemented by the loping funk of a backing track that proves very easy on the ear. The range of Longstreth’s singing proves the ideal foil for the beats, and draws the ear in.

Despite its more instinctive approach with percussion, GENE does on occasion suffer from Eastgate’s openness to musical genres, with one too many disparate musical ideas competing for the listener’s attention. With that said songs like Sudden Thing frame the solitude in a rather beautiful context, especially when that indoor scene segues into distant thunder for the start of Monochrome.

This is an intriguing record whose rewards come slowly but which leave a lasting impression. There is a restless quality to Sam Eastgate’s songwriting that feels very much of the times in which we live, but there is a warmly soulful side to balance it. His is a captivating voice, and although GENE may meander off the beaten track on occasion, it is a record that intrigues and subtly inspires.