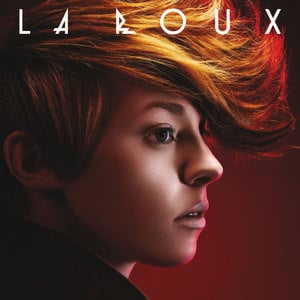 Boring people will say that music is not a competition and that polls and awards are essentially meaningless. But we’re in a recession, the recorded music industry is on its knees and now, more than ever, record companies need their much-hyped new acts to sell records.

Given all of this it still came as something of a shock when La Roux‘s recent single In For The Kill nestled inside the Top 10, spending a month at Number 2, the first single to do that since Take That‘s Rule The World. Radio 1 essentially ignored the single until it had already made the Top 10, its video is a fairly unlovable ’80s pastiche and the song itself features a vocal that ranges from enigmatic to screechy, usually in the same breath.

And yet it’s clear that La Roux’s front woman – they’re a duo, with Ben Langmaid the invisible producer – Elly Jackson was born to be a star. With alabaster skin, a shock of red hair teased into an almighty quiff and dress sense that would make Adam Ant balk, she’s a striking, colourful focal point.

She also knows a thing or two about the ’80s, co-creating songs that echo bands like Heaven 17, Depeche Mode and Yazoo, whilst still sounding modern and fresh. There’s none of this arch eyebrow raising either, this is authentic in its influence, with songs sounding delightfully ‘tinny’, as if the beats and keyboard riffs were made using the cheapest instruments from Argos circa 1987. Tigerlily, for example, features gurgling keyboards and a simple, clipped beat and little else bar a fantastic vocal melody and a spoken word interlude, a la Thriller, performed by Jackson’s Dad.

Elsewhere, the brilliant Quicksand utilizes ghostly backing vocals and jarring synth stabs, whilst future single, Bulletproof, is a neon riot of restless beats and a chorus the size of Joan Collins’ shoulder pads. It’s a frantic start to the album and the quality continues through I’m Not Your Toy’s laser-guided melody and Colourless Colour’s oddly infectious chorus (something about “early ’90s decor”). Lyrically, it’s concise and easy to relate to, Jackson summing up the end of a relationship on the sprightly Fascination thusly, “we make arrangements over the phone, where has all the conversation gone?”

The purple patch is halted, however, with the over-cooked centrepiece, Cover My Eyes, featuring the London Community Gospel Choir, whose presence jars against the synthetic musical backing. It also represents an obvious irony, with Jackson having recently bemoaned the lack of emotion in modern pop music when so much of La Roux (the album and the ‘package’) is surface level, impenetrable yet impressive.

We know that the album was written following a messy break-up and that Jackson broke down in tears whilst recording parts of it but we only know this from reading it in the press. Little of it comes from the songs themselves, many of them zipping by in a delightful haze of falsetto and synths. This isn’t a criticism of course – there’s no law that says that every song needs to connect emotionally – but some warmth would make a nice addition to the follow-up.

So, the girl with the androgynous look and a penchant for the higher register may yet see off the much-vaunted Little Boots. But music isn’t a competition, right? No, it’s much more than that, it’s a career and in these testing times you’ve got to strike while the irons hot. So far 2009 belongs to La Roux, the rest are just playing catch-up.