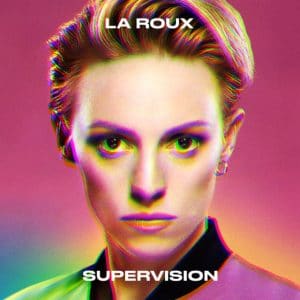 La Roux likes to take her time: Supervision is only her third album in 11 years, and comes six years after her last release Trouble In Paradise. The retro vibes are still there, the sheen of ’80s funk making these tracks glisten, and Ely Jackson’s voice is as powerful as ever.

The album opens with 21st Century, perhaps the strongest track with its infectious groove and intriguing vocals (“When the 21st century’s gone / we hold on, moving on”), followed by the shimmying bassline and rhythm guitar of Do You Feel. It’s a very effective one-two punch, representing the best of what is often unappealingly labelled ‘sophisti-pop’, and the rest of the album tries to live up to this promise – with mixed results.

A George Michael influence creeps into a few of these tracks, be it the Faith-esque Bo Diddley beat of International Woman Of Leisure or the chords lifted from Freedom 90 in Everything I Live For. Unfortunately the latter song is the weakest on here, the production feeling undercooked and the vocal melodies failing to gel with the accompaniment. Meanwhile, Gullible Fool has a promising start with its bouncy piano line, but its repetition starts to grate quite a while before the track fades out.

He Rides features a arpeggiac motif so irresistibly catchy and with such a lovely soaring hook that its slightly childish vibe can be easily forgiven, and Jackson’s knack for a tune is on display again on the charming Automatic Driver, which brings to mind everything that was brilliant about Amber Coffman’s debut solo album City Of No Reply.

Supervision is at times frustrating – an avoidable misstep here, an overindulgence there. But it also contains some of La Roux’s best music to date, music that’s witty, danceable and endearing all in one.