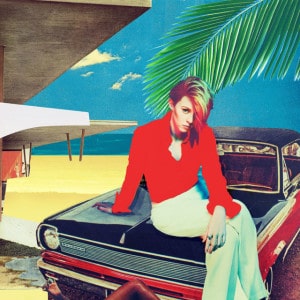 The long protracted album gestation is usually the preserve of cerebral, art rock types or tortured perfectionists rather than hip and fresh pop groups who are accustomed to rattling out the hits on an ever-moving chart bound conveyor belt.

La Roux, however, have never quite been your normal pop group. It’s now been almost exactly five years since La Roux’s tremendously successful debut album and quite a bit has changed in the intervening years. While the pop landscape has embraced EDM and a general homogenised pop dance sound, La Roux returns as the now strictly solo project of singer Elly Jackson, with co-member and producer Ben Langmaid departing due to the oft repeated reason of musical differences. The long awaited follow up, Trouble In Paradise, perhaps represents a truer reflection of Jackson’s character and moves La Roux’s sound on beyond the time rooted synth pop revivalism of the debut album.

It’s immediately apparent that Trouble In Paradise marks a subtle yet significant realignment of the La Roux aesthetic. While the sound is still broadly electronic, there is notable use of natural instrumentation, which helps to make the record warmer, lighter, and, most importantly, funkier than before. The songs lend themselves well to the playful tone and spirit that’s established throughout, beginning with the strident and gently euphoric funk pop of opener Uptight Downtown. The primary influence on the album seems to be pristine ’70s disco; however, on tracks like this one you are also reminded of Nile Rodgers‘ ’80s productions for Madonna and Duran Duran. It’s slick, assured and tremendous fun.

The album shares much with disco’s feeling of ecstatic, melodic ebullience. The rhythms, grooves and hooks are nagging, insistent and playful. Every song is memorable. On the gloriously sexy and cheeky Kiss And Not Tell, there’s the distinct impression that Jackson is cutting loose and having the time of her life. The record in itself is something of a liberation. Jackson sounds on prime form, full of attitude and assertion. There’s a greater sense of ambition prevalent here as she stretches both her sound and her voice.

The tone and sound is generally upbeat and danceable, even if there is a slightly darker undertone lurking beyond some of the euphoria. Cruel Sexuality slinks in on a loose, funky elastic bassline and it sees Jackson in fine voice describing a tortured relationship: “When passion turns into greed” lead on to “Why do you keep me in a prison at night”. It’s a clever piece of songwriting that offers intrigue within the brightness of the music. Songs like this showcase a more sophisticated side to La Roux.

Despite pushing the sound of LA Roux forward from the debut, Trouble In Paradise shares its hit packed qualities. The brilliantly titled Sexotheque is a Number 1 single in waiting, a quite fabulous piece of funky pop tropicalia. Indeed, the feeling of blissed out tropical vibes permeates throughout the record, from the cover artwork to songs like the loping slick funk of Tropical Chancer.

With La Roux there was always the sense that Elly Jackson was a more interesting and diverse character than the rather obvious synth pop of the debut album suggested, and that is certainly apparent here, particularly on album highlight Silent Partner. This song displays a newfound sense of ambitious expansion. Running to seven minutes, it’s the first La Roux song that can be described as anywhere approaching epic. Based on a huge synth throb, it builds and builds before taking off on a glorious synth-laden voyage. It’s an apt metaphor for the album itself as Elly Jackson firmly takes control of her career and delivers a tremendously confident second album, one that repositions La Roux and has a whole lot of fun while doing so.