by Luke Winkie
published: 23 May 2011 in Album Reviews
Tweet 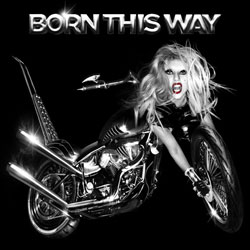 There’s been an odd little critical debate about what to do with Lady Gaga. As her notoriety transcended any claims of a fad, and her persona continued to engage on increasingly provocative (and occasionally baiting) plateaus, the prevalence of her artistry became harder to deny. “She’s bringing art back to pop,” “she’s smashing boundaries,” “she’ll never compromise for anybody”; all of these slogans sound almost complacent at this point, cemented by generational outrage and a solid PR operation.

It’s not all untrue, but very rarely does the alternative press devote even a cursory amount of attention to such a thoroughbred pop star. That doesn’t change her core identity as evidenced by Born This Way, a pedigree pop album existing in an otherworldly polish brought about as the result of a ridiculous number of resources; its sheen undeniable, its hooks nearly non-stop, it’s a portrait of how to chart in 2011. But this, for Gaga, doesn’t always work in her favour.

That über-glossy production comes from an absolute all-star cast of hitmakers behind the boards. Fernando Garibay contributes four tracks alongside the lead single Born This Way, RedOne’s cyborg europop (arguably the primary ingredient for every hit single these days) has a few collaboration credits, and even Mutt Lange, best known for making AC/DC famous,  stops by for a song. The amount of pull and fame a singer like Lady Gaga has forces Born This Way to be something of an event record, clocking in at a full hour without the slightest sense of modesty.

It rollicks through nonstop grade-A hooks with gratuitous ferocity. One of the deeper cuts, Bloody Mary, is literally centralised on a highly computerised choir repeating the sole mantra of “GA-GA, GA-GA” before it’s glitched in a euphoric beatdown. That much touted twanged, piano-driven bar-ballad Yoü And I has such a pristine filter on it, all the dirt and prairie dust is washed right off, leaving a beaming guitar and a drum machine. Blues in space, if you will.

Of course a lot of this works, in the same way the rest of Gaga’s catalogue works. The overproduction is stark and grating, but in the pop climate of the 21st century, that’s almost a given. This is an album about big choruses and big hooks, and they are scattered without any sense of scarcity throughout the hour, to the point where they’re so compacted it can seem like they’re fighting for space. Born This Way is a cannonblast of propulsion, forcing itself into the hips of its listenership with the intensity of its impact. Americano is elementally bunk – clichéd, goofy, and oppressively overwrought – but with the expensive powers available, it’s surprisingly, somewhat disconcertingly easy to forget that. Gaga’s prowess can transform even her weakest moments into potential singles.

But all this bombast does come at an expense, and that’s Gaga herself. The starry, chic songstress came to relevance on the power of her self-imposed mythology and striking visual eminence, but the beefy force of Born This Way tends to erode that original seduction. The record is blitzing, happily ludicrous, and plenty of fun for a while, but at the core there’s Gaga, singing beautifully but clouded by all the readymade pop around her. Eventually the spectacle tends to siphon her personality, leaving her whole existence looking flagrantly, and rather unflatteringly, ordinary. Born This Way’s failure is that it tends to leave Lady Gaga behind in its quest for chart supremacy – it’s a sustainable method, one which will keep the charts in check, but it will keep their star treading water in her search for true, universal acclaim.