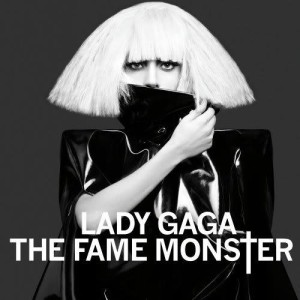 As well as the deceptively simple slabs of thunderous electropop for which she’s become a byword this year, Lady Gaga has managed to create a persona so perfectly in keeping with the times that Madonna must be livid.

She’s an obvious pop construct, revelling in her superficiality and trotting out the whole ‘commodity as art’ shtick. But she’s also a brilliantly clever artist who knows exactly which buttons to push.

The Fame Monster was initially set to be a repackaged ‘deluxe’ version of her multi-million selling The Fame debut. But the eight new songs were so strong that they’ve been released as an entity in their own right Stateside, while the UK gets them bundled with The Fame as a two CD set (buy it here).

So is the new material worth your pennies this Christmas? Michael Cragg directly injected Gaga into his ears and wrote some notes…

Hardly a massive departure, Bad Romance finds producer RedOne turning the gauge marked ‘Gaga’ up to 11. The intro is a bonkers mix of heavy synth lines and the lady herself intoning “ga ga oh la la”, before delivering lines as devilish as “I want you ugly/ I want you diseased”. The chorus is one of her best yet, mainly because it seems to contain at least three separate sections, each as catchy as the last.  It’s The Fame Monster’s single; check out the video at the bottom of this post.

Ace Of Base, anyone? They’re there in the cheesy, cheap beats, the lilting vocal melody and the fact that Gaga sometimes sounds like English isn’t her first language. Words are slurred about in her mouth as if alien. But, as with Sweden’s, er, finest, Alejandro is brilliantly catchy, deceptively simple and wonderfully melancholy. It’s also reminiscent of those early Madonna singles that dealt with tough subjects but enclosed them in joyfully uplifting melodies.

“Don’t call me Gaga” she says at the beginning, which is annoying because that’s what we’ve been doing throughout. Would she prefer Lady? That seems a bit of a stretch given her general attire and the fact that this song seems to be about men with large appendages (“I’ve never seen one like that before”). Again, this is a potential single, all descending keyboard lines, massive choruses and a Timbaland-esque male vocal blathering on about Gaga (sorry!) being “hot as hell”. Things get a bit gruesome at the end: “He tore my clothes right off/ He ate my heart and then he ate my brain.”

Ever wondered what Lady Gaga fronting Scissor Sisters would sound like? Well, wonder no more. Speechless is a big rock ballad which, for reasons unknown, finds our narrator using a strange cockney accent (“You threw your ‘ands up”). Without the bluster and the general whiff of Mika, this could have been a nice piano ballad, but Ron Fair’s production swallows a lot of the emotion. It’s not bad per se, just a bit of a disappointment.

Dance In The Dark

Ah, the synths are back. After a stuttering intro of orgasmic groans it becomes a little bit Gaga-by-numbers, which is a shame given the standard of the early tracks. Once again though, the whole thing is saved by another monumental chorus and some Madonna-esque spoken-word moments, including this shout out to a lost Royal: “You will never fall apart Diana, you’re still in our hearts / Never let you fall apart/ Together we’ll dance in the dark”. Which is nice.

Originally written for Britney’s last album, Telephone is the big duet with a certain Beyoncé. Only, it’s not a duet at all, with Beyoncé turning up midway to sing/rap her way through a brief interlude. Not that it isn’t completely amazing and probably the best thing on here, because clearly it is. It’s also very obviously a Britney song and probably the least conceptual thing on here. Essentially, Gaga’s in a club and her boyfriend keeps ringing, but she can’t talk right now because she’s drinking and dancing to her favourite song. The chorus runs thusly: “Stop calling, stop calling, I don’t want to talk anymore.” It also features a brilliant bridge, middle eight, verse, rap and even the bit where the caller gets through to her voicemail is maddeningly great.

So Happy I Could Die

The pace is slowed slightly here, with Gaga still in a club, but probably enjoying a bit of a sit down. Some of the lyrics are a bit too contrived (“I am as vain as I allow…I touch myself all through the night”), and it lacks the fizz of the earlier tracks but it’s still about 20 times better than the current Sugababes single.

This is possibly the biggest curveball on the album. Over a compulsive marching beat and processed horn blasts, Gaga implores her new man to show her his teeth. In the background another voice intones strange messages, which may or may not revolve around dentistry. It doesn’t really go anywhere, the chorus getting mixed in with the verses, but it’s still a compellingly dancey listen and may be indicative of where she’s heading next.

Given the strength of these eight stopgap songs – it’s amazing to think they were due to be lumped in on a re-release – Lady Gaga is the real deal. This world and others had better watch out.