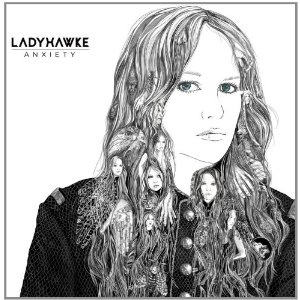 It is a brave move indeed on Pip Brown’s part to call her second Ladyhawke album Anxiety, for that is just what seems to have afflicted this most dangerous of records for any artist. In the build up to its release, Green has seen the street date moved from pillar to post and back again, for no especially obvious reason. But it’s a happy state of affairs to be able to report this doesn’t reflect on the music in any way.

Far from it, as Anxiety finds Ladyhawke adding more leather to her wardrobe, donning some killer heeled boots and applying liberal doses of eyeliner. The record finds her exploring a love of Joan Jett and David Bowie, rather than the appropriations to Fleetwood Mac that were witnessed in the first, self-titled album.

Immediately apparent are the grungy guitars, with an electric edge to their sound, and the punchy beats. Everything is much more ‘in the room’ than the breezy, wide open spaces she favoured for the likes of Paris Is Burning and My Delirium. The vocals have more of an attitude, too. “I watched you dancing with a girl like me”, complains the opener, at a loss to see why the subject of her affections is with an inferior model. It proves indicative of a darker colouring around the edges of the album. “I’ve always been so cautious, but I’m sick of feeling nauseous (pronounced as ‘nautious’)” is a great lyric on the title track, which lays bare a genuine anxiety. Gone Gone Gone, however, says to its protagonist, “save your advice for another girl”.

Once again, catchy melodies abound – meaning anyone liking the first album will more than likely lap the second up as well. Black White And Blue is a killer here, perhaps unintentionally using a melody straight from the middle of the Bee Gees‘ Tragedy, though its vocal is a little too deadpan. The Quick & The Dead starts off with measured tread, almost as if it’s about to turn into INXS‘s Need You Tonight. But this is part of Ladyhawke’s appeal – she makes songs that hit the ‘haven’t I heard this before?’ button before swiftly making them her own.

A lot has happened in pop music since Ladyhawke last released new songs, but it’s pleasing to report that one of the most likeable and unassuming songwriters around is sticking to her guns. If anything they’re more powerful this time.