by Andy Baber
published: 28 May 2016 in Album Reviews
Tweet 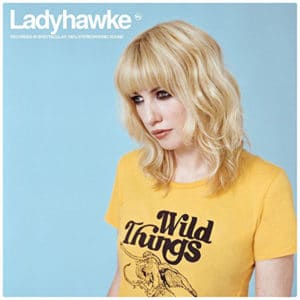 With two commercially and critically well-received albums under her belt, it would have been reasonable to assume that Pip Brown was pretty satisfied with life. However, the artist – better known as Ladyhawke – was far from happy, reportedly turning to drink to cope with her depression. Rather than continue on that downward spiral, though, the 36-year-old concentrated on getting healthy, completely cutting out alcohol and sugar.

The health kick did the trick and helped Brown deal with her anxiety. Significantly, it also resulted in the New Zealander scrapping a full album’s worth of material, with Brown determined to reflect her more positive outlook. “I tried very hard to change my life for the better, and to create a positive and bright environment to exist in,” she says. “This album really is a reflection of the headspace I found myself in after achieving this.”

This emphasis on infusing her new positive frame of mind into her work is clear from the outset on third LP, Wild Things. In fact, even the album artwork is representative of Brown’s transformation, with the bright blue background and yellow shirt she is pictured in backing up her description of the record as “colourful”. The music doesn’t disappoint either, as Wild Things certainly lives up to that billing throughout its 38-minute runtime.

Opener A Love Song is a prime example of what Brown has set out to achieve. After the more guitar-driven composition of her second album, 2012’s Anxiety, the song returns to the soaring synths of Ladyhawke’s self-titled debut, with the throbbing beat building towards a huge chorus. It’s upbeat, infectious pop with an uplifting message that borrows from Brown’s own experiences: “I’m falling down, too much to drink again/you pull me up and tell me how it could end.”

It’s followed by the equally energetic The River, which revolves around a funky beat and scaling synths that sit in the background before Brown launches into the playful chorus (complete with a few repetitions of “na na na na na na”). Wild Things increasingly feels like a cathartic experience for Brown and the fun doesn’t stop on the title track, where a glistening melody worthy of fellow synth enthusiasts Chvrches backs her blissful vocal.

Chills is more understated, but has an effortlessly cool LA vibe about it – which is appropriate considering that is where the record was made. The chorus, in particular, is delightfully irresistible, with Brown nonchalantly singing: “This is love/this is love/this is everything.” Once again the subject of love is the focus, but the message is always one of glass half full, as is also the case on the enchanting Golden Girl.

Then there’s Sweet Fascination, which sees Brown address the subject of obsession over glossy, sprawling synths: “You’re writing letters to me/you’re waiting for a reply/obsession makes you feel weak/it makes you turn a blind eye.” While there is nothing overly groundbreaking about Wild Things, it is hard not to get swept up in the feel-good atmosphere and the consistently addictive hooks.

One of the past criticisms of Ladyhawke has been that Brown is more style over substance, but Wild Things puts that theory to bed. There is plenty of heart in evidence here, while tracks like Hillside Avenue and closer Dangerous are reminders of her golden touch when it comes to writing memorable pop tunes. Ultimately, Wild Things is her most consistent and coherent effort to date, surpassing even her debut. It may have taken four years, but the end result has more than justified the wait.