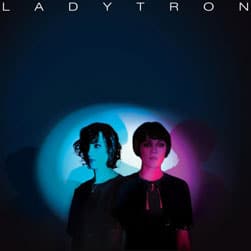 At the tail-end of the 1990s, when Britpop was panting its last breath, Ladytron weren’t just a breath of fresh air. At a time when electronic music was considered naff and record companies were still scouring the toilet circuit on the look-out for the next Oasis, they sounded completely out of this world.

Their 1999 debut single, He Took Her To A Movie, was a brave but understated mix of Kraftwerk‘s eerie, sci-fi electronica and, aptly, Roxy Music‘s mood and themes. At a time when guitars ruled the airwaves, the robotic vocals of Helen Marnie and Mira Aroyo were immediately fascinating, and their first album, 604, didn’t disappoint.

Twelve years and four albums later they’ve collected their best bits together for a retrospective, ahead of the release of their fifth studio album, Gravity The Seducer, later this year.

While it isn’t compiled in chronological order, even a first time listener would be able to group the tracks according to the albums they’re lifted from. 2001’s 604 is sexy, icy and unforgiving; Discotraxx, The Way That I Found You and Playgirl are frosty and desolate against the more polished, sultry songs that followed.

2002’s Light And Magic contributes some of the band’s best known tracks; Seventeen, Blue Jeans and Cracked LCD, while the fluffier, friendlier side of Ladytron was etched out in 2005’s Witching Hour (Destroy Everything You Touch, International Dateline, Beauty *2).

Ladytron have followed a similar route to peers and fellow noughties electro-revivalists Goldfrapp. They’ve very slowly edged away from the discontented, spooky sounds that earned them a cult following at the start of the last decade, and moved towards a more glossy, grown up sound. Ladytron’s last album, 2008’s Velocifero was their most radio-friendly to date, and as such its representatives, including Ghosts, Runaway and Black Cat, play up their trademark breathy vocals and have a more obvious dance vein, but played alongside the sparse, industrial sounds of their earlier work sound disposable and forgettable.

Perhaps their greatest single, the debut that announced their arrival, He Took Her To A Movie, is missed out thanks to the time frame (it was released a few months too early) imposed by the collection’s title, but two new songs are sneaked in. Single Ace of Hz continues the sound established by Velocifero, while a reworking of Death In June‘s Little Black Angel sees them submerged back into a darker, cloudier place.

Ladytron have become one of those bands we take for granted; they’re solid, steady and reliable. We’ve come to know what to expect from a Ladytron album, there are few surprises and as a band they keep themselves to themselves. So a collection like this is a timely reminder of what they’ve achieved; from the cold, hard sounds of 604 to the futuristic disco of Witching Hour, Best of 00-10 is a comprehensive over view of endlessly interesting band.