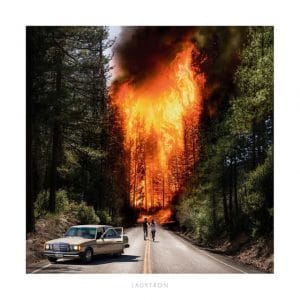 Accomplished and relatable 20 years on

It’s been eight years since we last had an album from the shoegazing mavericks and slick electro-pop outfit Ladytron. What’s even harder to believe is that it was 20 years since He Took Her To A Movie. And 10 years since the sublime Destroy Everything You Touch emboldened the seminal film The September Issue even further.

Their sixth album is eponymously titled and kicks off with the drum driven infectious fuzz of Until The Fire with muted, yet, beautiful as ever, vocal harmonies from Helen Marnie and Mira Aroyo. This weaves in celestial manner into The Island which is a glorious ’80s tinged, synth-pop dreamscape, evoking Chvrches and Propaganda at their finest. Even as Marnie signals that we are sirens of the apocalypse, we realise we have perhaps become so desensitised to such cynicism that we let it in without hesitation. This nihilism is explored more bluntly in the sinister synth of The Animals. There is no law. There is no God. There’s no heart. There’s no love. Yes, this leaves us feeling quite primal and desolate. But we can relate.

The tone gets darker on the urgent and vexed Deadzone and the dance floor electro-stomp of You’ve Changed, kind of a more malevolent Bad Romance. Tower Of Glass possesses a beautiful shimmer and Figurine has a filthy backdrop so intoxicating, you feel like a boa constrictor is entwining itself around you. In a good way.

Aroyo takes the vocal helm on the rocky and twisted Paper Highways, which could have been lifted of Juliet‘s Random Order, and Horrorscope, which is vaguely reminiscent of Bananarama in their indier days fused with early Shakespear’s Sister.

The album begins it close with the magnificent The Mountain, which comes across as a more ethereal version of Fleetwood Mac‘s Everywhere, with an optimistic, almost choral, flourish at the finish. Tomorrow Is Another Day has such divine optimism in its vocal harmonies that we are buoyed after this tremendous, pulsating and cathartic journey.

There’s nothing really vanguard here, but that is most likely because Ladytron have already blazed that trail. All in all, an accomplished return, and a welcome and relatable one for these dismal times.